Guard The Glory Of God In The Church – Chairman Tells Ministers 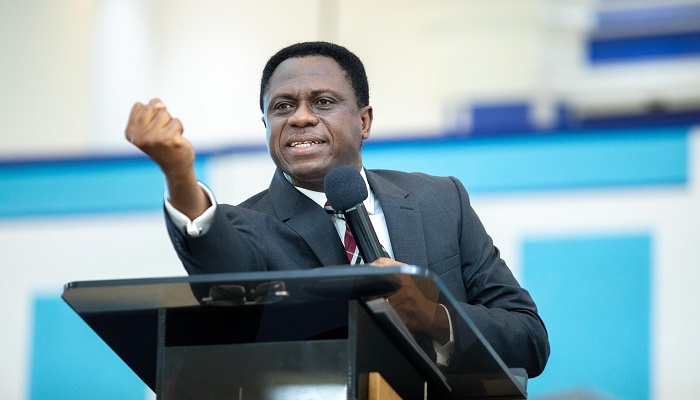 Guard The Glory Of God In The Church – Chairman Tells Ministers

Ministers of The Church of Pentecost have been challenged to jealously guard the glory of God in the church.

“As custodians of the Church, we must ensure that the glory of God is ever-present in the Church in every generation. We must jealously guard this glory because it can be pushed out of the Church (2 Corinthians 4:1; 1 Samuel 4:13),” Apostle Eric Nyamekye, the Chairman of The Church of Pentecost, said this when he addressed Heads at the ongoing November Heads’ Prayer meeting at the Pentecost Convention Centre (PCC), Gomoa Fetteh on Tuesday, November 12, 2019.

Speaking on the topic, “That there may be Glory in the Church,” Apostle Nyamekye explained that the Hebrew term which is commonly used in the Old Testament to denote glory is the word, “Kabowd,” which literally means weight or heaviness, but used figuratively to express the splendour, abundance, honour or glory of God.

“Today, people commonly use the term weight in a similar way. For example, we might say a believer has ‘spiritual weight’ (substance) if he possesses a matured, honourable, humble, and just character. This spiritual weight could be described as his ‘glory’, which makes him stand out from others.

“This is to say that what will make a church stand out from others is the ‘spiritual weight’ the church carries, which is the manifestation of the very attributes of God,” he explained.

In the New Testament, on the other hand, the Chairman noted that the Greek reference to glory is the term “Doxa,” which is translated as reputation, honour, fame, praise, dignity, splendour and brilliance.

He, therefore, noted that the world’s opinion about God’s reputation will depend, to a large extent, on how far His glory is seen in the Church because she is the representation of God on earth.

This, according to him, is what may have informed Paul’s prayer that “there may be God’s glory in the church throughout all generations” as recorded in Ephesians 3:21. “Paul’s prayer seems to suggest that what is of most importance in God’s church in every generation is His glory (Hag. 2:3-9; 2 Chron. 5:13-14; 7:1-2).

“The supernatural is the unexplainable manifestations of the power of God in the life of the Church; while the transformation in the church rests on the extent the Church is able to radiate the very beauty and holiness of God,” he explained.

This, he added, bodes well for Christian believers because it also gives credence and evidence of the reality of the living God to the watching world and thus makes their witness to unbelievers easier and more effective.

Apostle Nyamekye also stated that when the glory of God is in the Church, worship and sacrifice is made spontaneously without compulsion (2 Chronicles 5:13-14; 7:1-2; Exodus 33:9-10).

He, however, cautioned that if not safeguarded, the glory of God could be pushed out of the Church. He explained that lewd and ungodly practices drive the glory of God away from the Church (2 Corinthians 4:1; 1 Samuel 4:13) and cause the Church to lose her attraction to the nations (2 Chronicles 7:19-22).

He, therefore, called on the clergy, whom he described as the custodians of the Church, to endeavour to preserve and uphold the sanctity of the Church so that God’s abiding presence would continually be felt in the midst of His people. He urged them to do this by practising holiness themselves and also teaching and encouraging members to despise evil and live a life worthy of the holy calling they have received.

“Living a holy life is not something new to the born- again Christian, for we have been called to a holy life; that is who we truly are,” he stressed.