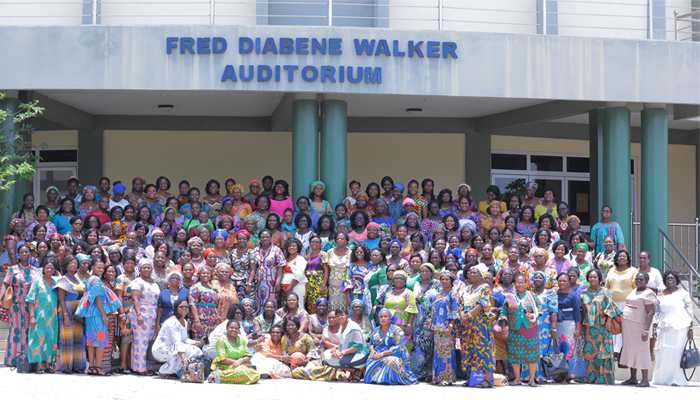 Ministers’ wives of The Church of Pentecost in the Greater Accra Region have embarked on a 3-day residential retreat at the Pentecost Convention Centre (PCC) in Gomoa Fetteh.

The event which took place from Wednesday, 27th to Friday, 29th March, 2019, was on the theme, “I Will Build My Church” (Matthew 16:18). The retreat, which was attended by 254 ministers’ wives in the region, was under the leadership of Mrs. Mary Nyamekye, the wife of the Chairman of the Church.

There was an intensive prayer session after the opening address.

The Rector of the Pentecost University College (PUC), Apostle Dr. Daniel Walker, reading the opening address on behalf of the Chairman, Apostle Eric Nyamekye, on the theme, “Possessing the Nations – the role of the Minister’s wife,” said that like the Israelites whom God was taking out of Egypt to the Promised Land, ministers’ wives are on a pilgrimage with their husbands.

Quoting from Titus 2:1-5, he said God has given ministers’ wives specific instructions for the journey, and if they will walk in truth, He will surely take them through to the end. He highlighted on the domestic, spiritual, social and vocational roles of the minister’s wife.

Mrs. Rose Dansoa Kumi-Larbi (wife of the General Secretary) in a presentation on the topic, “Intercession, a critical weapon for possessing the nations” based on Ezekiel 22:22-31 and 1 Timothy 2:1-8, strongly challenged participants that looking at the state of affairs in Ghana (ritual killing, kidnapping, failing marriages, etc.), pastors’ wives should not be comfortable but rise up and be intercessors.

Speaking on the role of the Pastor’s wife in CoP, Mrs. Grace Addison (wife of the former General Secretary) drew very useful lessons from the Beatitudes (Matthew 5:3- 11) and said that there are beautiful attitudes that the minister’s wife should portray. She spelt out some of the roles of the minister’s wife.

A dietician, Elder Nana Kofi Owusu, spoke on the essence of healthy diet for the minister’s wife to maximize potential in doing the work of God. He gave very useful tips in dieting, which he said when adopted, can ensure a stress-free pension for ministers and their wives.

Later in a presentation on the topic, “The Role of Visitation in Ministry,” Mrs. Mary Nyamekye quoted from Acts 20:28 and said that without visitation, ministry is not complete. Using Jesus as a model, the Chairman’s wife advised pastors’ wives to develop the heart of a shepherd to be able to care for the flock God has entrusted into their hands, because they will give account on them. She took participants through the visitation process, those who need to be visited, and the need to know their limit during visitation.

Mrs. Matilda Tekper (wife of the Achimota Area Head), also spoke on topic, “The Pastor’s wife and her Commitment in Ministry.” She took quotations from 1 Timothy 1:12, 1 Timothy 4:14-15 and Luke 8:1-3 and defined commitment as dedicating oneself to something or a cause, yielding good fruit and being beneficial to others.

She stressed that ministers’ wives have to express commitment by showing boundless love, offering intercessory prayers, being regular at church, supporting members with their skills and talents, among others. She highlighted some special roles of the minister’s wife as seeing herself as a Christian, standing with her husband in moments of despair, among others.

The closing message of the retreat was given by Apostle Ekow Badu Wood (Kasoa Area Head), who spoke on the topic, “The Church and the Home” (1 Corinthians 14:26). He said it is the responsibility of the minister’s wife to make the home a Christian home. He admonished participants to take their faith seriously, nurture it and let it grow.

Apostle Wood said the primary role of the minister’s wife is to respect, support and submit to her husband. He stressed on the need to raise children who fear the Lord. He also stressed on the importance of sex in marriage, saying, “Sex is a ministry and those who don’t have it should pray and fast for God to grant it to them.”

There were intermittent long refreshing hours of prayer. Numerous prophecies were received. God through the prophecies admonished participants to take their ministries seriously and walk with Him in truth.