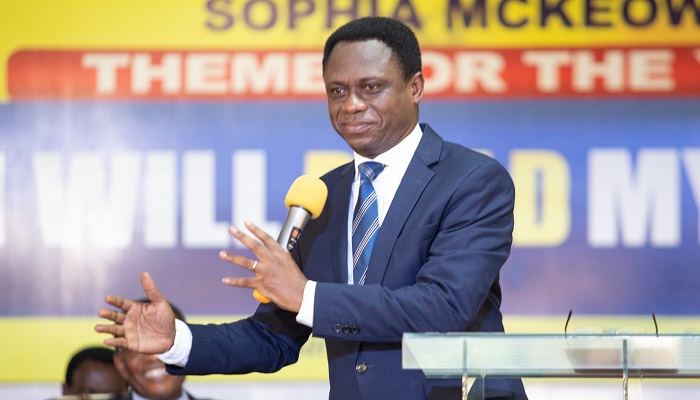 The Chairman of The Church of Pentecost, Apostle Eric Nyamekye, has said that God expects every believer to be productive in whatever capacity He has granted them the opportunity to serve.

According to the Chairman, it is just on the account of the grace of God that anyone receives the opportunity to serve in a leadership (influential) position. However, it requires hard work on the part of the individual to cause the desired effect for which God has appointed them to serve in that particular capacity.

“It is just by grace that you have been chosen to serve as Board and Committee members in a great church like The Church of Pentecost. However, you must not end at grace, rather the grace of God must produce effect. Apostle Paul combined grace and hard work, so we must also back up the grace we have received with hard work,” he said.

Apostle Eric Nyamekye said this during the inauguration of the newly-instituted boards and committees of The Church of Pentecost on Thursday, July 4, 2019, at the Sophia McKeown Temple at La in Accra.

Exhorting the audience, the Chairman noted that Apostle Paul’s analogy on the Body of Christ in Ephesians 4:11-16, was to underscore the fact that everyone needs the ministry of others. He stated that the various Boards and Committees are the ligaments that knit the whole church system together for development and growth. As a result, when a sector of the church grows, it affects the whole system.

He explained that for the church to grow it is important for every sector to execute its duties effectively and efficiently. He noted that when a sector of the church fails to discharge its duties it affects the growth and development of the Church body, thereby rendering it sick.

He, however, admonished the various Board and Committee members to be watchful so that in trying to discharge their duties they do not appear to be fighting against the church system because the implications could be far-reaching.

“The normal immune system of the body fights against diseases and viruses that attack the body. However, when the body begins to fight itself; it becomes cancerous; it cannot be cured, but only managed. In the same way, when Boards and Committee members fight against the Church, it would be very dangerous and eventually hinder the development and growth of the Church,” he said.

Quoting John 15:8 and 16, he urged the various Boards and Committee members to regard their service as a ministry and to do their utmost best to be productive in order to ensure the overall growth and development of the Church.