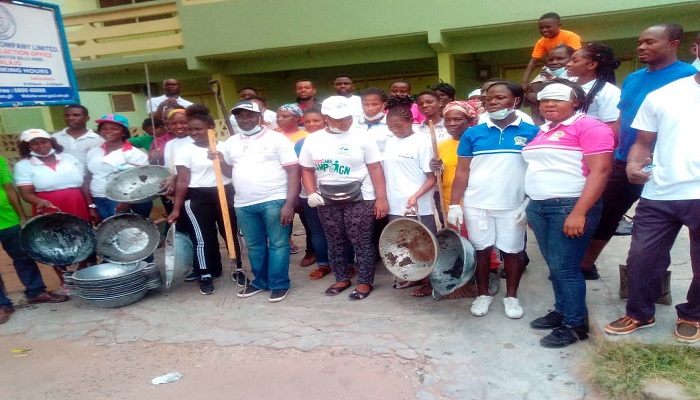 The Alajo Sub-Zone of the Ghana Pentecostal and Charismatic Council (GPCC), has organized a clean-up exercise at Alajo in Accra and its environs.

Hon. Alhaji Mohammed Quaye, in an interview, expressed his heartfelt gratitude to the GPCC for the laudable initiative which, he said, will go a long way to sanitize the community.

He stressed that sickness does not discriminate and can attack anybody, so there is the need to keep the environment clean.

The MCE pointed out that environmental cleanliness has been one of his top priorities. He, therefore, appealed to the residents to help keep the municipality clean.

He was hopeful that residents will stop indiscriminate dumping of waste in gutters and at other unauthorized places and maintain a healthy lifestyle.

Hon. Mohammed Quaye reiterated Government’s commitment to making Accra one of the cleanest cities in Africa. He called on all and sundry to help realise this vision.

The Alajo District Minister of The Church of Pentecost, Pastor Peter Mensah Yanney, on his part, said that the exercise was part of the activities marking the 50th Anniversary Launch of the GPCC. The main anniversary celebration will take place from October 12 to 18, 2019.

With scriptural references to Genesis 2: 15, Pastor Yanney said that God created the world and gave it to man to tilt, guard and manage, but to a large extent man has not lived up to expectation.

He said man has not acted responsibly in keeping the environment the way it should, and this has created lots of challenges such as flooding and all sorts of diseases in society.

“It is for this reason that we have organized our members for the clean-up exercise to help educate the community members on environmental health and promote a healthy lifestyle,” he stated.

Pastor Yanney stated that the exercise is unique because they are fulfilling the dual purpose of the church, thus the church has been called out by God and deployed to impact the world with godly principles and values.

“We are being examples for others to emulate, and this will help eradicate filth in Ghana,” he added.

He mentioned that, in order to sustain the exercise, there will be a regular and periodic clean-up exercise in the community at least once a month. “It is our hope that other denominations will join the crusade for a clean and healthy environment,” he stressed.