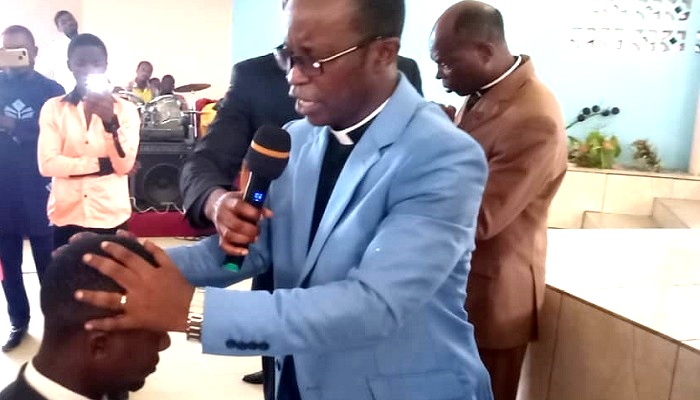 The Cameroun National Head of The Church of Pentecost, Apostle J.B.K. Tawiah has said that God chooses human beings at specific times to accomplish His purposes on earth.

Apostle Tawiah said this on Sunday, June 23, 2019, during an ordination service to climax a weeklong retreat for Ministers, their Wives and Officers of the Church at Douala in Cameroun.

Using Psalm 14:1-2, Revelations 5:1-12 and Isaiah 6:1-2 as his scripture references, the National Head of Cameroun stated that Jesus’ response to God’s need for someone to open and remove the seals of the scrolls and His declaration that the harvest is plentiful but the labours are few, as well as Isaiah’s response to God’s call to missions, are all instances that affirm his assertion that God requires human beings to accomplish His purposes on earth.

Apostle Tawiah also mentioned Jonah, who was sent to Nineveh to preach God’s word (Jonah 1:1-2), Moses, who was also sent as a deliverer of God’s people from Egypt (Exodus 3:9) and God’s concern that He did not find anyone to stand in the gap as recorded in Ezekiel 22:30-31, as further proofs to buttress his point.

In his sermon, Apostle Tawiah also noted that God always preserves the lives of those who avail themselves for His work no matter the challenges that come their way.

“God preserved the life of baby Moses through his mother, his sister Miriam and finally through Pharaoh’s daughter through circumstances that can only be attributed to divine intervention. Indeed Moses had to face the anger of some Egyptians resulting in his going into exile for forty years, but God preserved his life for the purpose of his life to be accomplished,” he said.

In addition, Apostle Tawiah cited how God preserved Joseph’s life from the hatred of his own brothers, his rescue from the pit, his sale into slavery in Egypt and his life in prison, as ample proof that God always preserves the lives of His chosen ones in the face of all odds.

The Cameroun National Head, therefore, admonished believers to trust and remain steadfast in God because He never fails His own.

Apostle Tawiah continued his exposition by explaining that the people God chooses to serve His will are humans sent to work among men. This, according to him, is the reason why even Christ had to take the form of a human being in order to accomplish His God-given assignment.

He, however, cautioned that the fact that God’s chosen people are humans should not be lost on their followers. This is because God does not just choose any person to accomplish His purpose, rather He considers certain important factors which become standards for His choice.

Apostle Tawiah, therefore, stated that, in selecting leaders, the Church ought to take into consideration the above-mentioned standards so as to be in tune with the will of God.

“Scripture is replete with guidelines in the selection of leaders for the church as seen in 1 Timothy 3:1-13 and Titus 1:5-9, among others. Chosen leaders must, therefore, live up to expectation because God does not call leaders just to occupy seats but to perform for the advancement of His Kingdom,” he advised.

Concluding his sermon, Apostle J.B.K. Tawiah stated that God’s choice of people also depends on their availability. He, therefore, advised all Christians to avail themselves for God’s use because there is a lot of work to be done in God’s house, hence God will always requiremen and women to serve.

The retreat which was held under the theme “I Will Build My Church” was attended by all church leaders from Douala, Yaounde, Limbe, Idenau and Garoua. Topics treated included: The Life of the Church, The Calling of Leaders, Ministerial Responsibilities, Core Practices of The Church of Pentecost, and Marks of the Early Church.

During the service, two ministers, who were called to the Pastorate during this year’s Extra Ordinary Council Meeting in Ghana, were ordained together with four Elders, two Deacons and two Deaconesses.