Go Beyond The Slogan – Apostle Isaac Amoako Tells The Clergy 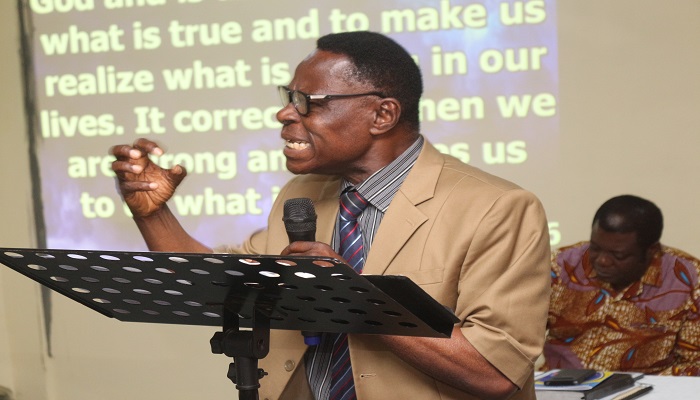 Go Beyond The Slogan – Apostle Isaac Amoako Tells The Clergy

“The real agent of transformation is the one who goes beyond the slogan. Slogan is a battle cry. Possessing the nations is a serious war. Slogan is a distinctive phrase of a group of people. A slogan must lead to an end product or service. It’s a catch phrase or jargon that leads to a product being advertised. The end result is of importance not just the slogan.”

These were words of Apostle Isaac Kwasi Amoako, the Goaso Area Head of The Church of Pentecost, when addressing the Ministers and Wives’ session of the Koforidua Area 2019 Apostolisation. He spoke on the topic, “Going Beyond the Slogan.”

He stated: “A slogan remains a slogan if nothing is done about it. All ministers should put their hands on deck; it’s an action time. The vision must be realized to the glory of God. This can happen when we live beyond the slogan and engage ourselves in hard work.”

He quoted from Ephesians 4:11-12 and indicated that the core responsibility of ministers is to equip members to do the work of ministry. “The dual purpose of the Church and the Christian life is important to note; we are called to worship the Lord and we are sent back into the world to serve God’s purpose,” he stressed.

Apostle Amoako revealed that God has three major tools He works with- the Spirit of God, the Word of God and the man of God. Explaining Genesis 1:1-3, 26, he said the Spirit of God was hovering over the waters and God said, “Let there be light,” which is His word. Finally, he said, God created man to take charge of the whole creation. So the third tool God uses is the man of God.

He indicated that God has no challenge with His Word and the Spirit, saying, “The only challenge God has is with man. The Spirit prepares, the Word produces and man preserves.”

“It’s unfortunate that the very man God put in charge to preserve creation has become the major agent of destruction. There is therefore the need for God through the ministers He has chosen to equip people to do the very things God has put man in charge,” he added.

Also reading from 1 Corinthians 3:10-15, Apostle Amoako indicated that, the foundation of the Church is Christ, and that it requires that man uses the right material in building upon the foundation that has been laid. “Since the work of all men would be tested with fire, we should be careful of what type of material we use in building,” he said.

The Koforidua Area Head, Apostle Samuel Osei Asante, on his part, said all workers of God should have heavenly reward in mind. He urged all ministers not to work for positions in the Church but for God’s ultimate reward.