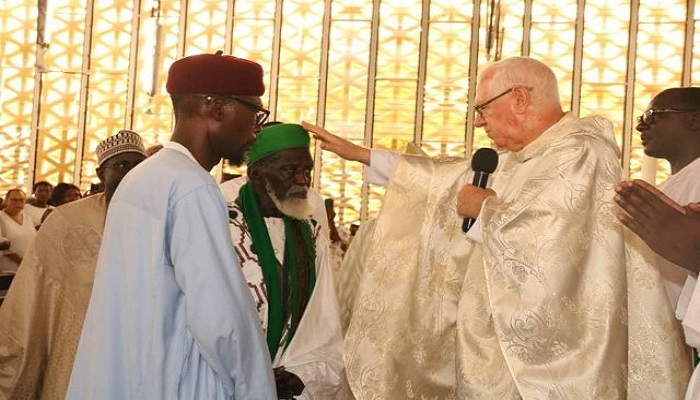 Many Ghanaians have commended the National Chief Imam of Ghana, Sheikh Dr. Osman Nuhu Sharubutu, for worshipping with Christians at the Christ the King Parish, in Accra, on Easter, ahead of the celebration on his 100th Birthday celebration, on Tuesday, April 23.

“He is simply phenomenal – Sheikh Nuhu Sharubutu!” a middle aged Christian woman told the Ghana News Agency. “Over the years he’s impressed us with his quiet but imposing demeanour – always speaking wisdom, always choosing the way of peace and love and encouraging his followers to do same.”

A man who describes himself as a ‘staunch Catholic’ said: “This is good, this is historic! I have always admired him for his pristine nature and laudable leadership style. I pray he continues to grow in greater grace and wisdom”.

Ms Agnes Andah, a young lady, also said, choosing Easter, of all occasions, to make the visit spoke volumes of the Spiritual leader’s maturity and understanding of the deep things of God.

On social media, where the pictures of the event have gone viral, many have invariably said the gesture would boost the highly commendable peaceful co-existence between Ghanaian Christians and their Muslim counterparts.

Reports say the congregants at the Easter Service were ‘pleasantly surprised’ when the Parish Priest, the Reverend Father Andrew Campbell, welcomed the National Chief Imam, with his large entourage.

On Saturday, the Office of Sheikh Sharubutu released a statement announcing that,

“The entire Ghanaian Muslim Community, including some leaders of non Muslim Faith, is all gearing up for the all-yearlong celebration of a National ICON of peace, unity and development”.

“Many are those who were fathered, taught and nurtured by this noble, humble and great man of Allah for a number of decades…,” the statement said.

A Professorship Award would also be conferred on Sheikh Sharubutu, who is already a multiple award winner.

On Friday, April 19, Vice President Bawumia joined worshippers at the Jummah Prayers to pray for the Spiritual leader as well as the nation, and its leadership.