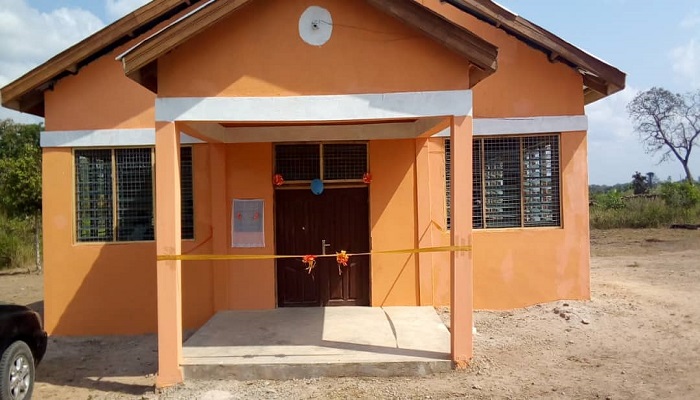 Ghana Ekura, a farming community in the Kasei District of the Ashanti Mampong Area of The Church of Pentecost, has had its Community-Based Church Building (CBCB) dedicated to the glory of God.

The building was dedicated on 11th December 2019 by the Mampong Area Head, Prophet Foster Kwasi Aniakwaa, assisted by the District Minister, Overseer Sylvester Avorgah, and the Area pastorate and their wives. The total cost of the building was estimated at GH¢ 47,300.00.

The dedication of the church building led to the conversion of the chief of the community, Nana Ghana, who had hitherto resisted moves by churches to settle in the village. He was immediately baptized in water.

Speaking at the service on the topic, “Building a Glorious Church” based on Ephesians 5:27, Prophet Aniakwaa explained that glory depicts respect, dignity, honour and integrity. These are the traits that the Lord Jesus Christ expects his followers (his bride) to exhibit, he said.

He stated that Jesus Christ was a perfect representation of God on earth, having confidently declared that, “Anyone who has seen me has seen the Father.”

He called on Christians to live to please Christ as his chosen people and be mindful of their speech and character they show to the world.

The Area Head encouraged members of the church to be truthful in their fields of endeavours, show respect to each other in marriage and be transparent in all financial issues.

He cautioned the youth against pre-marital sex which, he said, can prematurely abort their education and what God has destined for them and also contract sexually transmitted infections (STIs). He, therefore, encouraged them to aspire to achieve higher educational heights to rid the community of poverty.

The son of the chief who was mentally deranged was prayed for and instantly received his healing.