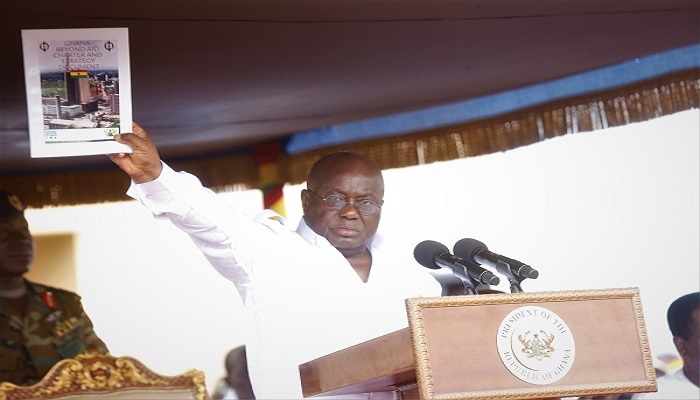 President Nana Addo Dankwa Akufo-Addo has unveiled the charter and a strategy document which will guide the nation in attaining the Ghana Beyond Aid agenda.

He said the essence was to create a nation that would be self-sufficient and prosperous, governed according to the rule of law, respect for human rights and individual liberties as well as the principles of democratic accountability.

President Akufo-Addo launched the document when he addressed this year’s national May Day at the Black Star Square. It was on the theme, “Sustainable Pensions for All; The Role of Social Partners.”

He explained that with the blessing of the Almighty God and the collective effort of all, Ghana would march boldly from poverty to prosperity and create a nation that the forefathers envisioned, which the current generation aspired to have and would make posterity to be proud of.

He commended the various groups from the government, labour, industry and students representatives for a good work done in putting together the Ghana Beyond Aid document.

The President stated that the government was determined to consolidate further the relations among its social partners in the post-IMF era.

That was why on April 18, 2019, the government signed a landmark social partnership agreement with organised labour represented by the Trades Union Congress (TUC) and the Ghana Employers’ Association (GEA).

He said those groups, together with government representatives, would provide a medium for building a sense of cohesion, trust, self-management, frank and open discussions to champion the course of development towards realising the vision of a Ghana Beyond Aid agenda.

The government, he said, was committed to a new social contract that promoted social dialogue in economic management and in the making of public policy.

It was also to assure workers and businesses, he said, noting “that you are our true development partners, and your ideas are critical in my government’s model for economic management and development.”

He said he would soon inaugurate a social partnership council with equal representation from the three social partners, and expressed confidence that the new approach to economic management and public policy-making would foster even greater cooperation and trust among the partners.