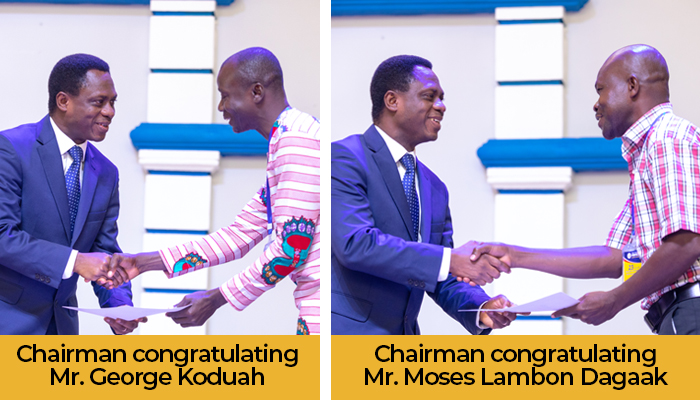 The 2019 Chairman’s Special Award meant to honour the most outstanding staff of The Church of Pentecost Headquarters has been jointly won by George Koduah and Moses Lambon Dagaak.

Mr. Koduah, an Electrician, works at the Projects, Development & Estate Department at the Head Office, while Mr. Dagaak is an Executive Assistant at the Bolgatanga Area Office of the church.

The prestigious award, which climaxed the 3-day Management and Staff Retreat held at the Pentecost Convention Centre (PCC) from December 10-13, was conferred on the duo by the Chairman of the church, Apostle Eric Nyamekye. The duo received certificates of honour and unspecified amount.

Speaking to Pentecost News, Mr. George Koduah, who is married with four (4) children, said that he least expected the award. According to him, he was left in a state of disbelief when his name was mentioned, saying, “I was initially looking around if it was somebody else when my name was mentioned because I didn’t believe I can win such an award.”

Thanking God for the special recognition, he said that the award will ginger him to work even harder than before, knowing that God and management watch whatever he does.

Married with four (4) children, Mr. Moses Lambon Dagaak, 39, joined the organisation in 2006 as an Executive Assistant and posted to the Bolga Area Office where he has worked till date.

He told Pentecost News that the award came to him as a surprise and attributed it to the grace of God.

Dedicating the award to the various Area Heads he has worked with namely, Apostle Ousmane Zabre, Apostle Dr Amos Jimmy Markin and Apostle Wilberforce Nkrumah Agyeman, for the motivation and training they have given him over the years, Mr. Dagaak said the honour done him is going to add up to what he has been doing already.

Advising his colleague staff, he stated: “Whatever you find yourself doing, do it with all your heart and expect your reward from God. We should not expect instant reward, but be patient and at the right time God will reward you.”