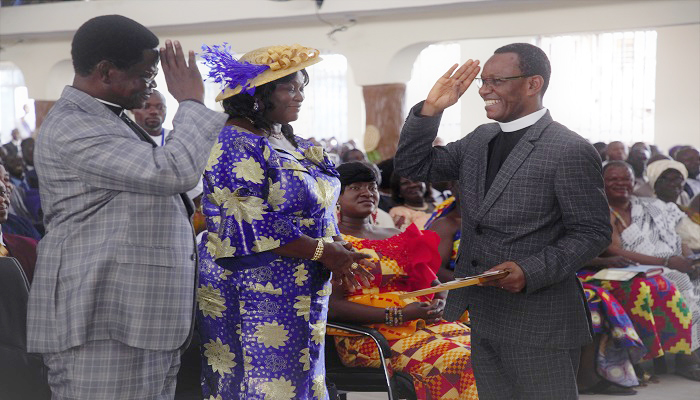 The General Secretary of The Church of Pentecost, Apostle Alexander Nana Yaw Kumi-Larbi, has applauded the Ashaiman Area  Head of the Church, Apostle Patrick Kingsley Ennin, for serving the Lord faithfully and impacting many lives.

Apostle P. K. Ennin, who has served as a minister of the Church for 33 good years, was officially retired from the active pastoral ministry on Sunday, August 18, 2019, at a mammoth service organised in his honour at the James McKeown Temple in Ashaiman Estate District.

He was recommended into the full-time ministry earlier by Apostle F. D. Walker (of blessed memory) in 1980 while he was working in Liberia. He however declined and finally yielded to the call about seven years later, thus in 1986 when he returned to Ghana upon recommendation by Apostle D. Y. Owusu (now deceased). He was confirmed as an Overseer in 1988 and called into the Pastorate in 1991. He was appointed as an Area Head in 2002 and ordained as an Apostle in 2005.

Speaking at the service, the General Secretary, Apostle Kumi-Larbi, who officiated the service, congratulated Apostle Ennin and his wife, Grace for availing themselves to be used by God to achieve great things in ministry. He taunted their philanthropic spirit, humility, dedication to duty, respect for leadership and faithfulness towards the ministry which, he said, have contributed significantly to their successful ministry.

The General Secretary who spoke on the topic, “Well Done, Good and Faithful Minister” based on Matthew 25: 1, 14, 31 and 21; Romans 12:3-8, explained that the parable in Matthew 25 may be divided into three sections: The parable of the ten virgins (verses 1-13), the parable of the talents (verses 14-30), and the sheep and the goats (verses 31-46). All these parables, he said, are depicting the end-time where God will reward faithful servants and condemn those who failed to obey His commands.

He explained that God has given each person some talents and tools to work with in order to be fruitful. The parables, he said, teaches believers to go out and multiply with what God has given them.

“The story of the sheep and the goats is a metaphor for a shepherd separating the sheep from the goats; just like God will separate the righteous from the non-righteous. The righteous, on the right, would have served Christ through serving others, and because of this, they will be allowed into the kingdom of heaven. Those who are not righteous, on the left, would have not served Christ through serving others. They will not be able to enter the kingdom of heaven. All three of these stories are about how to live in eternity with Christ,” he explained.

He pointed out that entering the kingdom of God depends on how one uses their resources, talents, giftings and graces.

Touching on his main text, Matthew 25:21 (His master replied, ‘Well done, good and faithful servant! You have been faithful with a few things; I will put you in charge of many things. Come and share your master’s happiness!), the General Secretary stressed the need for Christians to serve God faithfully and serve others well as demonstrated by Jesus Christ who came to serve and give to humanity (Matthew 20:28; Mark 10:45; John 13:1-17).

“Christians are to minister to others out of their devotion to Christ and their love for others, whether the other people are believers or unbelievers. Ministry to others should be impartial and unconditional, always seeking to help others as Jesus would,” he said.

Explaining who a Christian minister is, Apostle Kumi-Larbi said a minister is, literally a servant, saying, “Whatever training or gifts we have received, God has given them to us so we may serve His people well.

“It is my prayer that every minister will see the call of God upon his life as a special grace given him to enable him to perform his or her priestly duties of preaching the gospel and changing lives.”

The General Secretary stated that God has given all human beings various talents based on the abilities He has placed in them and that talents can be sharpened through learning to develop them into skill. He, however, said that believers in addition to their talents have been given spiritual gifts which make them so unique in whatever they do. He charged Christians to use their talents, skills and spiritual gifts to expand the Kingdom of Christ.