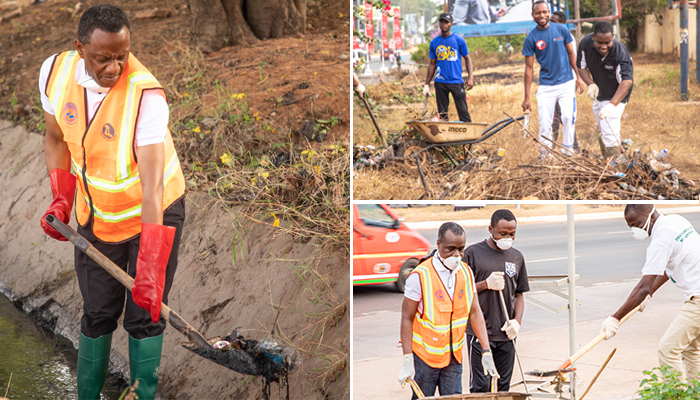 The early morning exercise, which started at the Mobile Force Park, near the Police Church at 37 Military camp, saw members of the church weeding the bushy areas, sweeping the filth that had been created and desilting the choked gutters. It ended at the Opeibea House intersection.

Addressing the participants at the end of the exercise, Apostle Kumi-Larbi congratulated them for turning out in their numbers to undertake the exercise.

“We are calling for a paradigm shift and attitudinal change whereby Ghanaians will sit back and rethink the way we keep the environment. It should be our habit to always keep our surroundings clean and be our brother’s keeper. We should properly dispose of the waste we create and stop littering the environment.

“The church wants to draw the attention of Ghanaians to some research findings which suggest that if we don’t change our attitudes towards the environment in the near future we shall import water, because most of our water bodies are polluted. We ought to protect our rivers, keep our surroundings clean, stop the indiscriminate felling down of trees and protect all other natural resources God has bestowed on the nation. We should be patriotic citizens by preserving what we came to meet for posterity,” he stated.

According to the General Secretary, it is unchristian to mess up the environment and later come around to clear it.

“I pray that this exercise will not be a mere public show, but it will become part and parcel of us. The community should form a sanitation and watchdog committees to protect the environment. With this environmental care campaign, we are expecting that Ghana will be a clean place if we all resolve not to litter,” he added.

He ended by saying that, “A true gentleman and a true lady is a person who does not litter outside. He/she will always put his/her waste into his/her bag and take it home.”

The Roman Ridge District Minister, Pastor Clement Achim Gyimah, on his part, expressed his appreciation to the members for embarking on the clean-up. He indicated that the exercise will be sustained in the district through bi-monthly clean-up exercises in the catchment area to always keep the community clean.

“I’m impressed with the initiative by The Church of Pentecost. I entreat all religious bodies and organisations to take up such initiatives to make Ghana clean,” Hon Yussif said, adding, “It is not good to pray in a dirty environment, so as Christians and Muslims it is our responsibility to keep our surroundings clean.”

Present to participate in the exercise were Mrs. Rose Dansoa Kumi-Larbi (wife of the General Secretary) and Mrs. Beatrice Achim Gyimah (wife the Roman Ridge District Minister), among others.