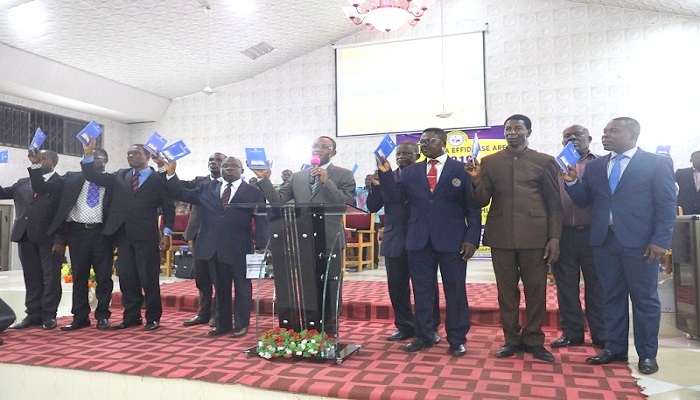 The General Secretary of The Church of Pentecost, Apostle Alexander Nana Yaw Kumi-Larbi, has launched the ‘Operation One Officer, One Ministerial Handbook’ distribution to all ordained officers of the Church.

The General Secretary launched the exercise on behalf of the Chairman and the Executive Council at the Ebenezer Assembly in Koforidua Effiduase District on Thursday, February 14, 2019, during the ongoing Officers’ Retreat and Apostolisation in the Koforidua Effiduase Area.

As part of the plans to ensure the successful implementation of the five-year strategic vision of the Church (Vision 2023) dubbed “Possessing the Nations,” the leadership of the Church is distributing 200,000 copies of the Ministerial Handbook to all ordained officers of the Church across the world.

Ordained officers of the Church (Elders, Deacons and Deaconesses) are estimated to be around 110,000.

The General Secretary indicated that plans are far advanced to translate the handbook into about eight local Ghanaian languages to make it more reader friendly to all persons.

He charged the officers to read the handbook alongside their Bibles and the Church’s Constitution so that they will be abreast with the direction that the Church is going. This, he said, will equip them to effectively teach the members.

He also hinted that Elders of the Church will be made to go through continuous training in the quest to holistically equipping them for effective ministry.

Per the Constitution of the Church, Elders, Deacons and Deaconesses, who are unpaid officers, are the frontliners of the Church. Elders are responsible for the effective running of the local church.

The intentional training of the Elders which will augment the existing discipleship programme is vital in equipping them for societal transformation and impact.

To assess their effectiveness to run the local church, District Ministers shall be required to carry out annual performance appraisals with Presiding Elders to ensure that desired performance objectives are being met at the local level.

The overall goal of the vision is to build a church where members go to possess their nations by transforming every worldview, thought and behaviour with values, principles and lifestyles of the Kingdom of God and thereby turning many people to Christ.