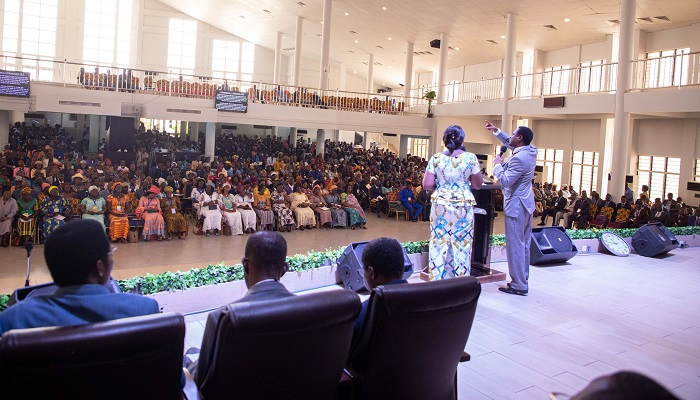 The maiden Francophone Ministers and Wives’ Conference of The Church of Pentecost which drew about 1,300 participants from 24 French-speaking countries across the world came to an end on Sunday, February 16, 2020.

The historic conference, which took place at the Pentecost Convention (PCC), Gomoa Fetteh, near Kasoa in the Central Region, was under the theme: “A Glorious Church To Possess The Nations” – Ephesians 3:21; 5:27.

Speaking at the climax on Sunday, the Chairman of the church, Apostle Eric Nyamekye, admitted that the Holy Spirit had revived the ministers and their wives with a fresh anointing to impact their members.

He stated: “Dearly Beloved, I see the Lord is doing something new in our ministries in the nations. The fire that has been lit by the Lord in our hearts in this conference will continue to burn. With this zeal, let us go back to our nations and go for the glory of God.”

The Chairman further charged the Francophone ministers to go and internalise the Vision 2023 in their respective countries to ensure that the values and principles of God are brought to bear in every sphere of society, and thereby turn many people to Christ.

“I call upon all of us to internalise the Vision, picture the intended results, talk about it over and over again until it becomes a legend or an important story that we are able to model for our officers and members to emulate,” he stated.

Speaking earlier on the topic, “That There May Be Glory In The Church,” the Chairman noted that Jesus’ intention of establishing the Church is that through it the manifold wisdom of God will be revealed to the people of the world.

“We should pray that the glory of God will be in the Church even after our generation. The most important thing that should be in the temple of God is His glory. When the glory is not the Church, the Church becomes a mere club or social organisation,” he said, adding, “We should yearn for the active presence of God; the Shekinah glory.”

He explained that the priests of Israel could not enter the temple that King Solomon built because the cloud/glory of God came to dwell in it. He pointed out that it is the glory of God that makes the difference and makes things just happen in the Church.

The Chairman also said that Moses sought for the glory of God and when he [Moses] descended from the mountains, his face was radiating such that the Israelites could not watch his face and, therefore, had to put on a veil.

Apostle Nyamekye added that just as King David wanted to build a temple of God that was of great magnificence and fame and splendour in the sight of all the nations (1 Chronicles 22:5), so should the New Testament church be of great magnificence, graciously talked about, and beautiful in the eyes of the watching world.

“If you want to build a church that God lives in, a church that is beautiful in the eyes of the watching world, then you must delve deep into the things of God, because a glorious church is expensive not in terms of money, but a personal commitment to God.

The Chairman, however, cautioned the ministers and their wives to guard the glory of God in the church because it can leave the church (1 Samuel 4:1-22; 3:1, Ezekiel 8:3-14).