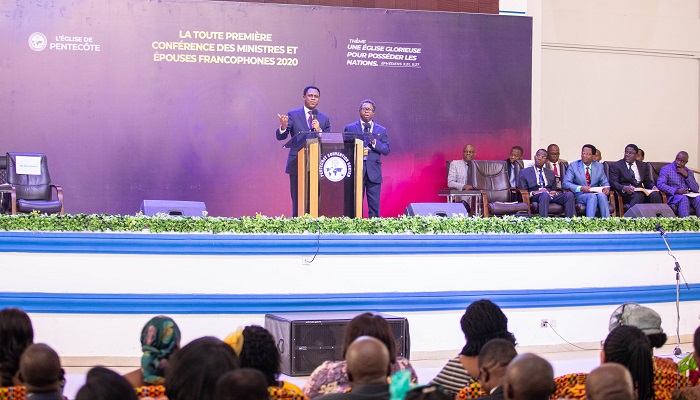 The maiden Francophone Ministers and Wives’ Conference of The Church of Pentecost (Conférence Des Ministres Ét Epouses Francophones) has begun at the Pentecost Convention Centre (PCC), Gomoa Fetteh, near Kasoa in the Central Region.

The conference, which is being attended by over 1200 ministers and their wives from 24 French-speaking countries from Africa, Asia, North America and Europe, was opened by the Chairman of the church, Apostle Eric Nyamekye, on Thursday, February 13, 2020. It is expected to end on Sunday, February 2020.

Opening the conference, the Chairman expressed his joy over the meeting, which he described as a dream come true.

According to him, the leadership of the church had planned to have a conference for ministers and their wives in the Francophone countries for some time now, saying, “This is the day that we have looked forward to and my heart is gladdened to see the fulfilment of this day.”

He commended them for the work that they are doing in their duty stations in their respective countries.

Speaking on the topic, “Welcome to the Church,” the Chairman said that the “ possessing the nations” agenda of the church is about the church taking over the nations. “We are not going to wage wars against any government, but we want to use the principles of Jesus Christ to rule the world,” he explained.

He stated: “In The Church of Pentecost, we expect both the wife and husband to be in ministry. We want to see the two of them doing the sacrifice together. So we don’t usually expect our wives to get so much engrossed with the things of the world so that they can get time for ministry work.

“We expect the wife to be preaching, teaching, and laying hands on people to set them free. Theirs is not just at the kitchen; they are part of the ministry. We want to see them praying for the sick to get well.”

Expounding further, the Chairman indicated that when one joins the ministry, he becomes the property of God. “Once you join the church, it is a sacrifice. You are wholly for the Lord. Jesus is able to manage your challenges and will supply your needs.

Apostle Eric Nyamekye stated as ministers of the gospel they have been apprehended for Christ, and that they have sacrificed their liberty for the sake of the house of God.

He, therefore, advised them to denounce any secret sins because “crooked people cannot be part of the ministry.”