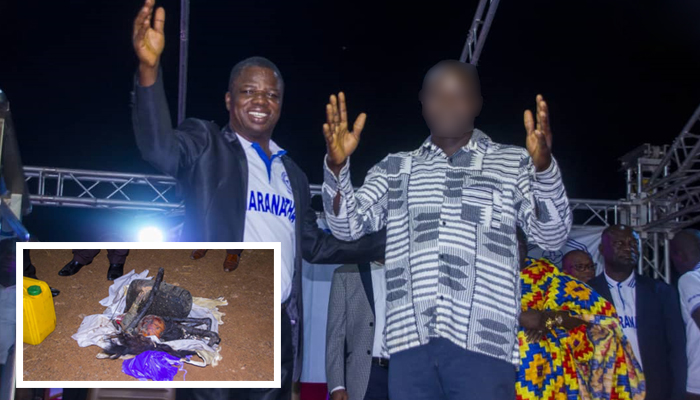 A popular fetish priest in the Abirem area has surrendered his life to Jesus Christ and given his idols to be burnt.

David Azirabi, who has been a fetish priest for 27 years, was touched by the power of the Holy Spirit during a power-packed prayer meeting held on January 31, 2019, at the Abirem Abaase English Assembly auditorium as part of the Akim Oda Area Gospel Crusade which was under the theme, “Maranatha, Our Lord Come” (1 Corinthians 16:22b).

The prayer meeting chaired by the Area Head, Apostle Seth Kwaku Asomaning, saw a charged atmosphere which recorded some spectacular events such as healings and spiritual breakthroughs.

During the intensive prayer session led by the Area Head, Azirabi was touched by the Holy Spirit and informed the Area Head of his desire and willingness to give his life to Christ and submit the idols to be burnt. He confessed that he was no longer interested in working with the idols since he had realised that he was lost without Christ.

Apostle Seth Kwaku Asomaning prayed for Azirabi and encouraged him to fully seek the Lord faithfully to enable him see the hand of God in his life. He has subsequently been baptised in water.