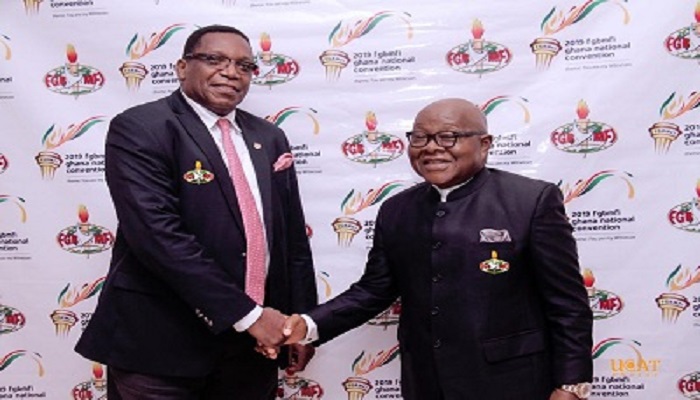 The Speaker of Parliament, Professor Aaron Mike Oquaye, has advised Ghanaians to be vigilant and not contend with acts that were contrary to the fundamental principles of God and the Christian faith.

That, he said, would firmly build and enrich the moral standards of the nation to edify its development.

Prof. Oquaye was speaking at the launching of the 2019 Full Gospel Business Men’s Fellowship International (FGBMFI), National Convention held in Accra at the weekend.

It was on the theme “You are my witness” and was aimed at reaching men in all nations for Jesus Christ.

The convention comes off on August 22 and is expected to win 3,000 souls for Christ.

“Christians must not compromise their faith to accept any evil agenda that will destroy the good moral values which are enshrined in the word of God. We must act responsibly to meet the perfect will of God, this will enrich our nation,” he said.

The Speaker of Parliament indicated that the Bible should be a mighty weapon that the nation should use to fight against all immoral conducts which had the tendency to destroy the moral foundation held in awe by the nation.

He noted that liberalism had corrupted the society and had led people astray from the original values of the country and of God.

Mr George Prah, the National President of the FGBMFI, in a welcome address, charged Christians to uphold ethical values and think of transformation and development of the nation as a key gospel work.

He stated that everything concerning Jesus geared toward change, hence his outfit would collaborate with Parliamentary Christian Fellowship to stem out corruption.

Mr Prah observed that countries that progressively developed recognised ethical principles such as respect for laws and regulations, effort to save and invest, will to be productive, punctual, responsible and truthful.

He, therefore, called on Christians to pursue the right virtues for the betterment of the nation.

The chairman of the Central Planning Committee of the FGBMFI, Mr Joseph Boamah Sasu, explained that the convention would be a life changing moment for people who needed financial freedom to have their desires met.

He urged Ghanaians to complement their efforts and win every single lost soul saying “if you can speak in other tongues and cannot win a soul to God you have achieved nothing as a Christian.”

The convention he said would bring together government officials, business executives, senior public servants, professionals, members and non-members of the fellowship to confer and share rich values as well as experiences under the banner of God.