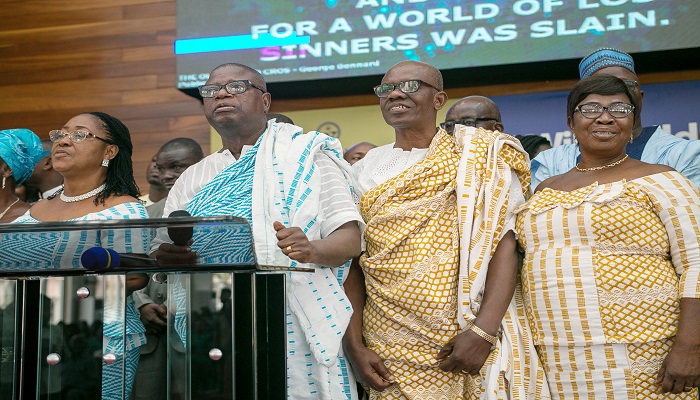 The Pentecost International Worship Centre (PIWC) – Sakumono, has organised a special retirement service in honour of Elders Professor Kwame Boasiako Omane-Antwi and Martin Doku, who have served the Church for many years.

The service which took place on Sunday, July 21, 2019, was attended by several dignitaries including the immediate past Chairman of the Church, Apostle Prof. Opoku Onyinah, the Rector of the Pentecost University College (PUC), Apostle Dr Daniel Walker, Bishop Gideon Titi Ofei of Pleasant Place Church, and officials of the Tema West Municipal Assembly, among others.

Elder Prof. Omane-Antwi, the Vice Rector of PUC, has served as an Elder of the Church for 21 years, while Elder Martin Doku, an accomplished Banker and Accountant, has also served for 34 good years.

In his brief remarks, Apostle Prof. Opoku Onyinah, described Prof. Omane-Antwi as a gift not only to The Church of Pentecost but to the entire nation.

According to Apostle Prof. Opoku Onyinah, he first got to know Elder Prof. Omane-Antwi when he became the Rector of PUC and was looking for an astute academic to work with. “When I interacted with him and informed him of our decision, he went and came back and explained that his wife has asked him to accept the offer so long as it is the work of God,” the former Chairman said.

“It was a big sacrifice that he made when he accepted to work for PUC. Though we all put in our maximum effort, Prof. Omane-Antwi was far ahead of us. It was through his effort that we were able to establish and serve in the University. He knew what to do; he was much matured and did not entertain rumours.”

“He respects both junior staff and senior staff, he is content with whatever he has and does not complain,” he added.

In a sermon on the topic, “Sing unto the Lord a new song,” the Teshie-Nungua Area Head, Apostle Dr Alfred Koduah, urged the retiring elders to do exploits for the Lord even in their retirement.

“Human life starts from the womb and ends up in the tomb, from the maternity home and ends in the mortuary, it starts when parents decide to bring children into this world, and ends when family members decide when to send a person to the grave,” he explained.

Apostle Dr Koduah also read the entire book of Psalm 150, stressing the need to singing a new song to the Lord irrespective of the circumstances one finds himself.

“Sing unto the Lord a new song. To our retiring gallant elders, as you enter into the new phase of your life, the Lord who has sustained you to this stage is calling upon you to sing a new song unto Him because our God is a living God.”

Apostle Prof. Opoku Onyinah said prayers for the retiring officers and their families.

Elder Prof Omane-Antwi, 67, was born on 3rd March 1952 at Tiawia in the Atiwa West District of the Eastern Region. He is a Chartered Accountant by profession, a Certified Fraud Examiner, a Tax Practitioner and University Lecturer. Though he was born into the Salvation Army Church, he joined The Church of Pentecost in 1994 at the then Estate Assembly at Sakumono and was baptised by Pastor John Kwaku Ninfah. He was ordained as an Elder in 1998 and has served in many capacities at the District, Area and National levels including Chairman of Pentecost Hospital Board, Public Affairs Committee of the Church, Chairman of the Boards of New Times Corporation and the Graphic Communications Group.

Elder Martin Doku, on the other hand, was born on September 25, 1949, at Krobo Odumase in the Eastern Region. He confessed faith in Christ in 1969 at Oda Secondary School during Scripture Union service and was baptised by immersion by the late Pastor J. T Okrah at La. He was ordained as a Deacon in 1986 and later as an Elder after which he served in various capacities in the Church.