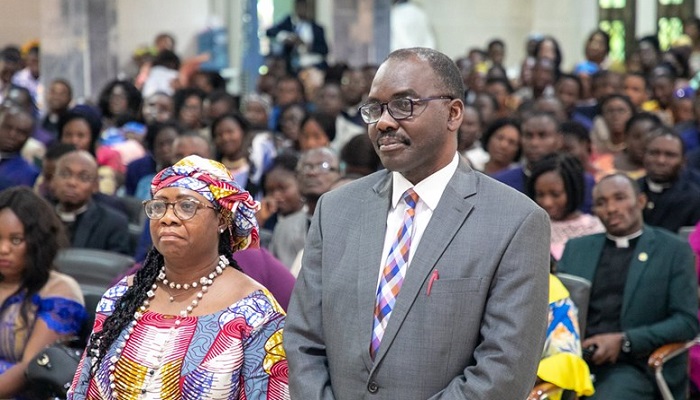 Former Vice Chancellor of the Kwame Nkrumah University of Science and Technology (KNUST), Elder Prof. William Otoo Ellis, has been appointed the new Deputy Director of the Children’s Ministry of The Church of Pentecost.

Elder Prof. Otoo Ellis was inducted into office on Sunday, July 28, 2019 by the Chairman, Apostle Eric Nyamekye in a colourful induction service held at PIWC-Dansonman in Accra. The event was also witnessed by the General Secretary, Apostle Alexander Nana Yaw Kumi-Larbi, the Koforidua Area Head and Executive Council Member, Apostle Samuel O. Asante, the Children’s Ministry Director, Apostle Fred Tiakor, and other ministers of the Church. The event also saw the induction of Pastor Ebenezer Hagan as the new Youth Ministry Director of the Church.

In his acceptance speech, Elder Prof. William Otoo Ellis expressed gratitude to God for counting him worthy to serve the Church in this new capacity. He was also grateful to the Chairman and the Executive Council for the confidence reposed in him.

He took the opportunity to encourage the entire membership of the church, particularly church leaders, to pay careful attention to child members since they are the future leaders of the Church. He also advised parents to make conscious efforts to raise their children in the fear of God, stressing that: “Your child is a reflection of your home and your home is a reflection of your child,” he said.

He has also served as visiting Professor at the University of Maryland Eastern Shore (UMES) and an adjunct Professor at the University of Alabama, Birmingham in the USA. He had his academic training from the Kwame Nkrumah University of Science and Technology (KNUST), Kumasi, Ghana and McGill University, Montreal, Canada. He has several scholarly publications to his credit, mounted several exhibitions with Research colleagues and being a speaker at many national and international conferences. Prof. Ellis has worked on several projects with grants from reputable institutions including USAID, IDRC, NIH, UNESCO, IFAD, DfID and Mastercard Foundation. During the course of his service, he has fostered strategic institutional relationships with some very distinguished personalities, facilitated and coordinated linkages with many international institutions, multinational organizations and the private sector.

Apart from his academic and professional work experience, Prof. Ellis is an Elder of The Church of Pentecost and has been in God’s work since 1983. He was a member of PENSA-KNUST during his school days at KNUST, being a member of the Inter-Hall Christian Fellowship (IHCF) where he worked in the Prisons Wing. He started his Children’s Ministry work right in Montreal, Canada during his postgraduate education at McGill University. Since that time (1990), he has still been working with the Children’s Ministry. Prof. Ellis has worked in different areas of the church doing this in line with duties as a Children’s Ministry teacher. He has served in executive positions of the Children’s ministry at PIWC-Asokwa

He is married to Dr. (Mrs) Florence Ellis, a Deaconess of the Church and an Area Executive Member of the Asokwa Area Children’s Ministry. They are blessed with two daughters; Dr. Theodora-Ann Ellis and Miss Emmanuella Ellis, a PhD student at McGill University, Montreal, Canada.