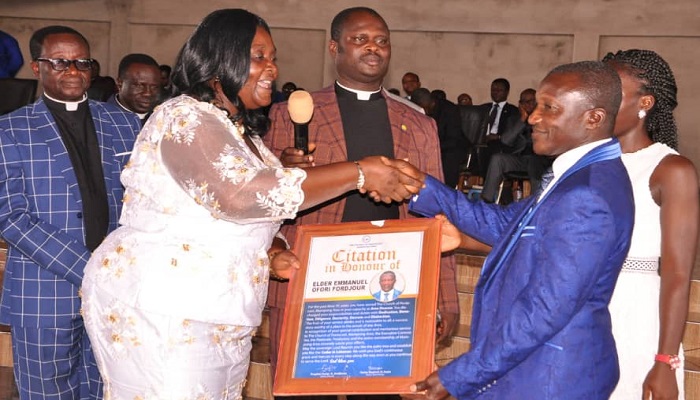 The Asante Mampong Area of The Church of Pentecost on Sunday, December 8, 2019, organised an Appreciation and Thanksgiving Service in honour of the immediate past Area Deacon, Elder Emmanuel Ofori Fordjour, who served for a period of nine (9) years (2010 – 2019).

The service, which took place at the Mampong Tunsuom Central Assembly, was chaired by the Bompata Area Head, Apostle Abraham Lincoln Angoh (a former Area Head of Mampong).

It was also attended by Prophet Foster Kwasi Aniakwaa (Mampong Area Head), Apostle James Nana Ofori (Mankessim Area Head) and the pastorate in the Mampong Area. Also in attendance were some Area Deacons in the Ashanti Region, Mrs. Grace Asante (wife of Apostle Emmanuel Asante (Rtd), among others.

The service was also used to thank God for the life of Deaconess Esther Ofori Fordjour (wife of the former Area Deacon) who suffered stroke for the over five years but has now recovered to the glory of God.

Speaking on the theme, “Walking in Truth to Declare God’s Glory,” Apostle Angoh advised members of the church to let their lives reflect Christ in the society in which they lived.

Reading from Ephesians 3:21 and 3 John, Apostle Angoh explained that the Christian journey could sometimes be burdened with issues which are difficult to understand. These difficult issues, he said, sometimes make it look difficult to practice the word of God. He, however, assured that “a glorious end and a fruitful ministry always await persons who stand up for God’s glory to be made manifest.”

He encouraged the members to emulate Gaius and Demetrius who obeyed and supported the early church, subjected themselves to authority and devoted themselves to the ministry of Apostle John which eventually earned them a testimony of commendation in the Bible. He further admonished members and officers to be wary of the likes of Diotrephes who were in the habit of maligning the authority of leadership.

The Bompata Area Head used the opportunity to commend Elder Fordjour for his service to the church for the 9-year period during which time he also had to cater for his sick wife.

Prophet Aniakwaa, on his part, described Elder Fordjour as a man of integrity who made God known in all his dealings. He thanked him for his devoted service to the Mampong Area which led to growth and prudent fiscal accountability in project implementations and other activities in the Area.

Reading from Psalm 44:17 for his response, Elder Fordjour thanked the Lord for successfully seeing him through his tenure as Area Deacon. He also expressed his appreciation to the leadership of the church for counting him worthy to serve in the capacity of an Area Deacon.