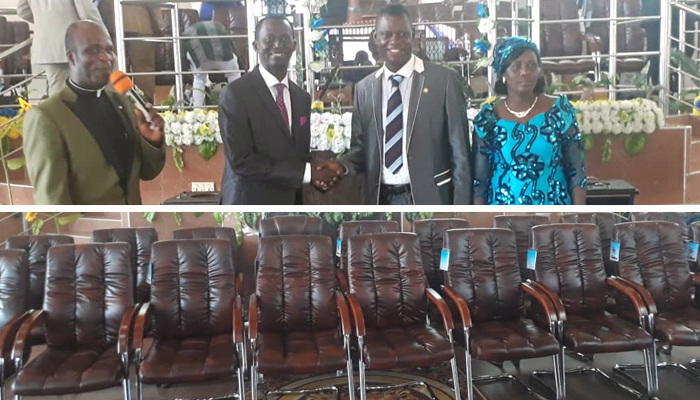 Elder Isaac Kofi Eduah has donated 20 executive guest chairs to the Twereboa Central Assembly in the Dansoman Area of The Church of Pentecost.

The donor, who is the Chief Executive Officer of the Christians Estate Developers, a private estate developers, and his family worship at the assembly.

The gesture was to relief the assembly from further financial burden after spending so much money to replace the pews in the church with modern ones early this year.

“I saw the struggle the assembly went through in replacing the pews, so I told God to help me replace the chairs on the platform for the church.

“I made that promise to God while there was no money to carry out this good intention, so I told a business partner who is into import and export to assist me in this regard,” he said.

According to Elder Eduah, about a month ago, the business partner informed him that the chairs had arrived at the port “so I should bring GH¢20,000.00 to clear them. I again presented it before God and surprisingly God provided the money for me to clear them.”

He thanked his family for their immense support and contribution towards the realisation of the dream.

Dedicating the chairs, the Dansoman Area Head, Apostle Onyinah Gyamfi, commended Elder Eduah and his family for the gesture. He stated that what the elder and his family have done for the Church and God is worth emulating, and it will attract divine blessings.

Reading from 2 Corinthians 9:6-7, he advised believers to learn how to give willingly to God so as to be blessed by God.

Mrs. Martha Onyinah Gyamfi (wife of the Area Head) and Mrs Rosemary Vuvor (wife of the Twereboa District Minister), on behalf of the Church thanked the donors for their kind gesture and asked for God’s blessings for the family.

The Twereboa District Minister, Pastor Benjamin Ken Vuvor, on his part, gave thanks to God for a prayer answered. According to him, he earlier had some discussions with the leaders of the assembly about the need to procure a new set of chairs to be used at the platform.

“This really shows that the Lord indeed listens to prayers and takes delight in the request of His children,” he said.

He asked the Lord to pour His blessing upon the Eduah family for their kind gesture.