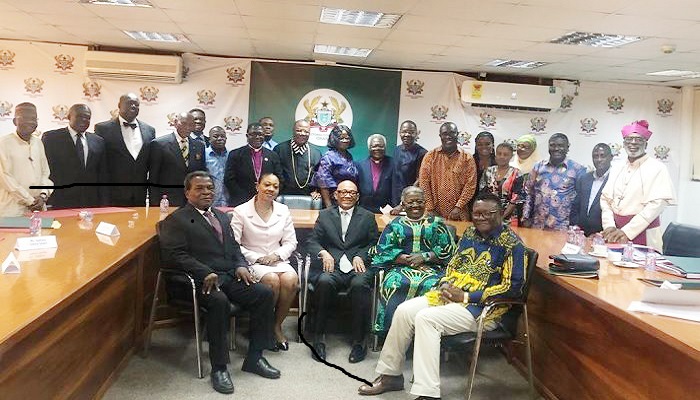 A meeting held by the Electoral Commission (EC) with the Advisory Committee of Eminent Persons and the Interparty Advisory Committee (IPAC) to find common ground on the upcoming compilation of a new voters roll ended in a stalemate.

The biggest opposition party, the National Democratic Congress (NDC) and some smaller political parties are fiercely opposed to the decision by the election management board – the EC, to conduct this year’s general election with a new voters register.

The Advisory Committee had called the meeting to help the key stakeholders to agree on the way forward, but those for and against the new register, stuck to their entrenched positions.

Mr. Justice Emile Short, Chairman of the Advisory Committee, told the media that the Committee would be issuing a communique on the outcome of the meeting and make suggestions to the EC.

Mr. Johnson Asiedu Nketia, the General Secretary of the NDC, told journalists that he found it unfortunate that the CSO’s were denied the opportunity to make a presentation at the closed-door meeting.

The CSOs, he said, had been key players in the nation’s democratic governance and for that matter they should have been allowed to state their position on such a crucial matter.

According to him, the Advisory Committee of Eminent Persons, after listening to all sides, said that they believed that each side had made a valid contribution, which would be useful to the advice they would be giving to the EC.

Mr. Yaw Buabeng Asamoah, the Director of Communications, NPP, told the Ghana News Agency (GNA) that, nine political parties that were present at the meeting, including the ruling party, backed the EC’s decision, while the NDC and four others, said they were not in favour.

Two other parties, however, did not have any position on the new register.

Mr. Osei Bonsu Amoah, a leading Member of the NPP and Deputy Minister of Local Government and Rural Development, said the EC was an independent creature of the Constitution, and could go ahead with its decision, if funding had been provided.

Hajia Hamdatu Ibrahim, Acting National Chairperson of the CPP, said her party was taking a neutral stand on the issue.