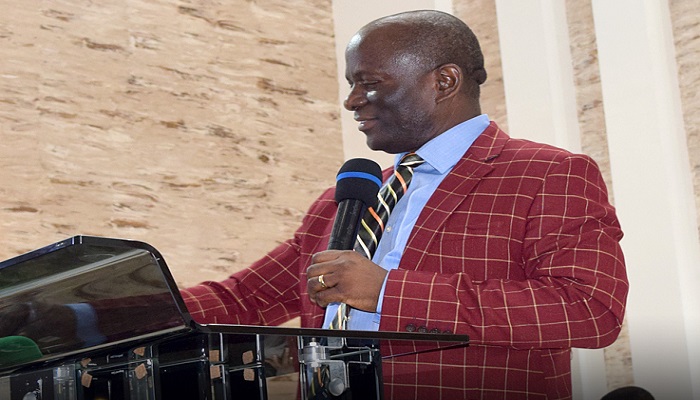 The Kaneshie Area Head of The Church of Pentecost, Apostle Mike Etrue, has admonished Christians to continually live to please God and not be slaves to their past since Christ paid every debt of sin.

He added that the finished work of Christ has made provision for believers to receive forgiveness of sin and power to live righteously to please God.

This was contained in a sermon he preached at Shalom Worship Centre on April 18, 2019, on the theme, “Tetelestai: It is finished” based on John 19:30.

According to Apostle Etrue, many believers still live with the scars of their past, because they think their past deeds have not been forgiven them. He, therefore, encouraged believers to live for Christ with full assurance of salvation because of the death and resurrection of Christ.

He revealed that Jesus Christ was not lamenting when he shouted, “Tetelestai: It is finished” on the cross. This declaration, according to Apostle Etrue, was a triumphant declaration of the finished work of Christ.

Reading from Ephesians 2:12 and Ephesians 4:18, Apostle Etrue explained that sin separated man from God because of the sin committed by Adam, adding that, “Adam’s disobedience placed man under the condemnation of God’s wrath.”

He also revealed that Jesus made only one journey to Calvary which has and continues to change the destinies of those who believe.

“Jesus made one journey to Calvary but what transpired there changes the destinies of those who believe. Events that took place at Calvary are vital in Christianity, because at Calvary, love triumphs over law,” he stated.

Apostle Mike Etrue noted that the perfect and complete sacrifice of Jesus brought believers victory over Satan (Colossians 2:15), redeemed believers from all curses and the power of sin (Galatians 3:13) and has ultimately reconciled man to God (Romans 5:10).

This year’s Easter convention in the Kaneshie Area was held concurrently at seven different zones. The other zones were Abeka, Chantan, Bubuashie, Kaneshie and Darkuman. To the glory of God, the convention witnessed massive turnouts as God confirmed the ministrations of His word with signs and wonders, massive soul harvest and great outpouring of the Holy Spirit.