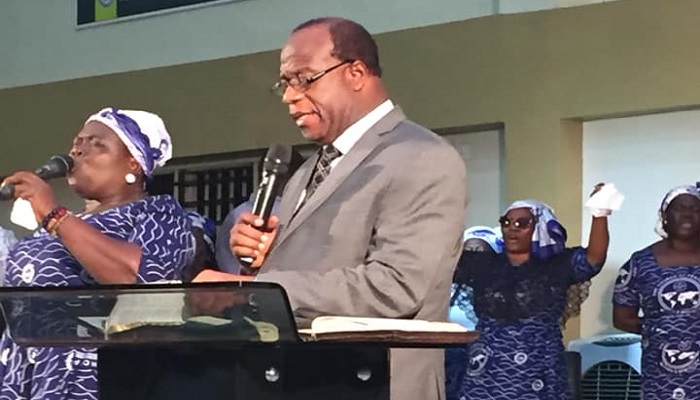 The Teshie-Nungua Area Head of The Church of Pentecost, Apostle Dr. Alfred Koduah, has urged Christian women not to allow themselves to be deceived by fraudulent people parading themselves as prophets of God.

He has therefore urged Christian women to stop roaming from one prayer centre to the other and pray in their homes and churches.

“False prophets are now bathing women, selling water, oil, anointed Gari, drinks, stones, and even canes to whip the enemies of their clients,” he bemoaned, adding, “Prophets are stepping and walking over women with their shoes, pressing their stomachs, with some even chewing leaves, and I wonder why the women allow themselves to be treated that way.”

Apostle Dr. Koduah was addressing a joint service by the Area Women’s Ministry held at the Agnes Boahemaa Gyimah Memorial Temple at Nungua, Accra on the theme, “Challenges Confronting Christian Women of Today.”

Quoting 1 Corinthians 10:31, Apostle Dr. Koduah said it does not glorify God when so-called prophets step on women’s stomachs simply because they are looking for the fruit of the womb. “Prophets are pushing you down, spitting on you while some of you carry blocks and other heavy items to their prayer centres,” he said.

He said the world has changed, and this has come with a lot of problems which has put Christian women under pressure to do things the way the world does them. He stated that, there are spiritual, emotional, business, educational and social media challenges that women face, saying, “To create a difference is difficult.”

Apostle Dr. Alfred Koduah further encouraged young women not to yield to sexual pressures in exchange for jobs in the business world. “Sometimes before you are promoted, you must do something; even some lecturers and teachers are asking for sexual favours before young ladies could pass their subjects; many men desire to have sex with women before assisting them in one way or the other, and this can be very frustrating for godly Christian women in all fields of endeavours.”

He urged the women to read their Bible, pray, and attend church services regularly to be able to overcome the pressures of life instead of spending time watching soap operas on television.

“With the emergence of the mobile phone, many people are telling lies and people are engaged in unhealthy conversations, whatsapp messages and photos that are not good for Christians are all on their phones. The Bible says bad conversation corrupts good character,” he said, while urging women to be decent in their phone conversation.

Pastor Stephen Akosah of Spintex Road District led the women through a powerful time of prayer after the sermon.

The Area Women’s Leader, Deaconess Cynthia Araba Siaw Agyepong, was grateful to the Area Head for spending time with the Women’s Ministry. She urged all the women to refrain from patronizing prophets who will end up destroying their lives and that of their families.