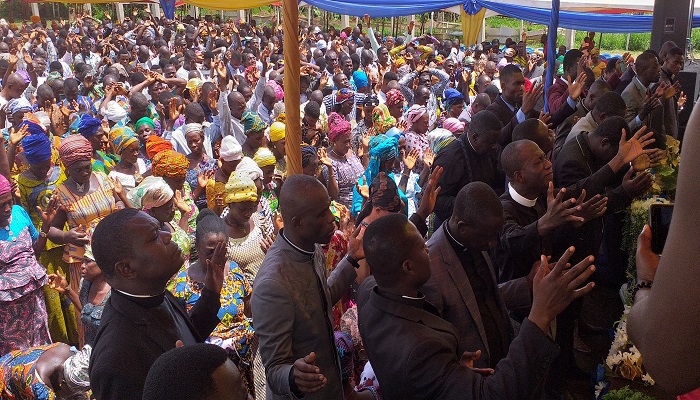 The Berekum Area Head of The Church of Pentecost, Apostle Anthony Kingsley Miah, has urged Christians to desire the anointing of the Holy Spirit to do greater exploits to impact and transform lives.

He said this during the 5th Area Prayer Festival held on 17th May, 2019 at Mpatasie New Town, near Berekum in the Bono Region.

Speaking to the topic, “Ask before I go,” with scripture reading from 2 Kings 2:9-12; Matthew 7:7-11 and John 14:14, he said that when God was about to take Prophet Elijah to heaven, Elijah asked his servant Elisha who clung to him to ask for anything he wanted before his departure. Interestingly, he said, Elisha did not ask for wealth or any material things, but for a double portion of Elijah’s spirit/anointing.

According to Apostle Miah, anyone who is departing from a particular place to another desires to bless people around him before departure. In that vein, he said, when a minister of the Church is being transferred or retired, he pours out the best in him to benefit the congregation. “Success without a successor is a failure,” he said.

The Area Head, who will be retiring from the active ministry in August this year after 36 good years in the ministry, told the members to ask God for a greater anointing to do the work of God.

He revealed that Elijah wrought 16 outstanding miracles whilst Elisha wrought 32 outstanding miracles. “This is because Elisha asked for a double portion and it was granted him. If only the Christian is determined like Elisha and will ask God for the anointing, it will be given without measure.

“If the desired anointing which helps the Christian to do diverse services can be attained, then one must be sinless, humble, prayerful, studious and determined,” he added.

The Area Head used the occasion to ordain three Overseers into the Pastorate. The three, Pastors Eddie Sarpong of Japekrom District, Emmanuel K. Kumi of Asiri District and Samuel O. Aboagye of Kwakuanya District, were called into the pastorate by the Executive Council during the 16th Extraordinary Council Meetings held recently at the Pentecost Convention Centre, Gomoa Fetteh.

As part of the event, Apostle Miah also launched the Area Environmental Care Campaign which has become one of the heartbeats of the Church.