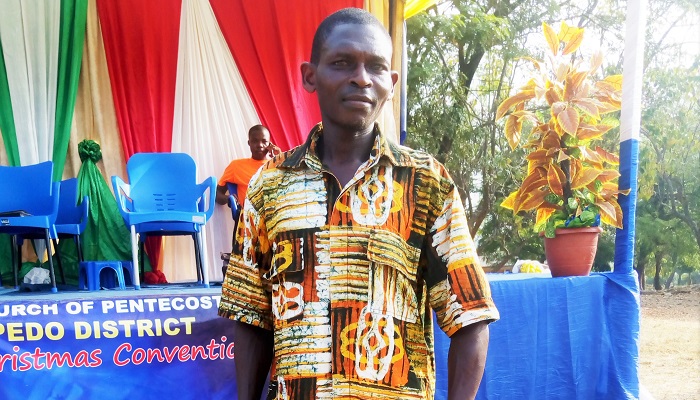 41-year-old Richard Akpali from Ziavi-Adukofe in the Volta Region had been battling an addiction to alcohol for the past 20 years. As a result of his alcoholism, he lost his job and marriage. He was also rejected by his family and prevented from having any contact with his two children.

Under the influence of alcohol, he walked on foot from Ziavi-Adukofe to Ho, covering a distance of 39.5 kilometres.

Two days later, he was found lying in a gutter by Deaconess Olivia Azidoku of Hopedo District, who was returning home from the 2019 Christmas Convention with her daughter.

According to Deaconess Azidoku, when they first saw Richard, they thought he had died. However, when they drew closer, they found him breathing, although unconscious. “He was motionless and could not open his eyes. We did not know him or where he was from, but we were moved with compassion and decided to carry him home,” she recounted.

That very morning, the Hopedo District Minister, Overseer Mark Kofi Adom-Nyankey, had a strong urge to visit the Azidoku family. Unfortunately, at that time, there was no one around to drive him to the place. So, the minister, who hitherto had never ridden a motorbike, decided to go on his own. Being led by the Holy Spirit, he found his way to Deaconess Azidoku’s house to meet the distressed family looking on hopelessly and confused as to what to do with the man.

Overseer Adom-Nyankey prayed for the man, and instantly Richard regained consciousness with no sign of intoxication, but for the strong smell of alcohol on him (an odour that lasted for days).

Richard Akpali later confessed that while the minister was praying for him, he saw two angels lifting him from the gutter and sending him to a convention ground. He accepted Christ as his Lord and personal Saviour on the same day. He has since been baptised in water and received the baptism of the Holy Spirit. To God, be the glory!