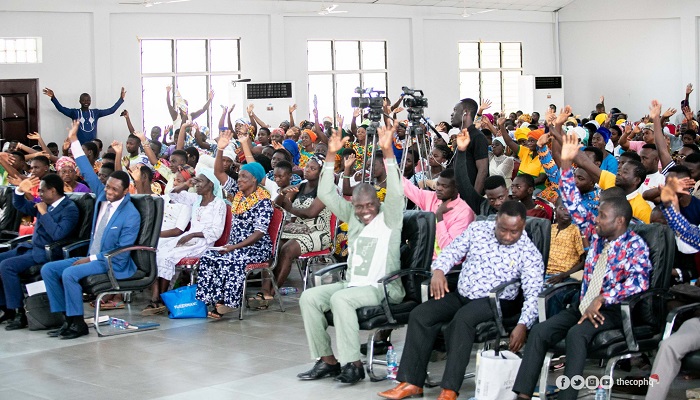 About 500 members of the Deaf Ministry of The Church of Pentecost met at the Pentecost Convention Centre (PCC), Gomoa Fetteh from 25th to 29th December 2019, for their 7th Christmas Convention.

The convention which was on the theme, “Unto Us A Child Is Born” (Isaiah 9:6), was held under the auspices of the Evangelism Ministry.

Meant to promote socialisation, spiritual renewable and networking among the participants, members of the specialised ministry also engaged in various activities such as aerobics, indoor and outdoor games.

The atmosphere changed when the Chairman of the church, Apostle Eric Nyamekye, fellowshipped with them on Friday morning. They could not hide their joy as they sang and danced to the glory of God using sign language.

Some of them gave living testimonies about the supernatural happenings in their lives to the excitement of the congregation.

Addressing the congregation, Apostle Nyamekye expressed his delight to God to be part of the special meeting.

Expounding on the significance of the virgin birth of Jesus Christ with Matthew 1:1-16 as his anchor scripture, he stressed the need for Christians to understand Christ’s virgin birth and tell it everywhere – on the mountains and over the hills.

From the genealogy of Jesus Christ, he said that it is clearly stated in the scriptures that Jesus Christ had no earthly father since it was only his surrogate mother Mary whose name was mentioned (… and Mary was the mother of Jesus who is called the Messiah – vrs. 16b).

He mentioned that the angelic announcement heralding the birth of Jesus was also evidence to prove that Jesus was not born of man and woman but of God (Matthew 1: 18-24, Luke 1: 26-38).

Apostle Nyamekye said that there are many instances in the Bible where Jesus, after growing up, never referred Joseph as his father but always mentioned God as his father. He added that Jesus’ response to Mary in John 2:1-5, 19:25-27, showed that he did not refer to Mary as his mother.

Quoting John 16:28-30, the Chairman said Jesus spoke plainly about his origin, which is the Father in heaven.

He disclosed that Jesus’ virgin birth was so crucial because it had to take a divine intervention to redeem humanity from perpetual sin since no human being can save his fellow human beings. This is because every man born of a woman is sinful.

The Evangelism Ministry Director, Apostle Dr Amos Jimmy Markin, led the congregation in the prayer session after the word ministration by the Chairman.

Over 50 members of the ministry rededicated their lives to Christ during the service.

The convention was coordinated by Pastor Reuben Wuni (Deaf Ministry Pastor) and Probationary Overseer Alexander Nyame (National Coordinator for the Ministry to Persons With Disabilities).