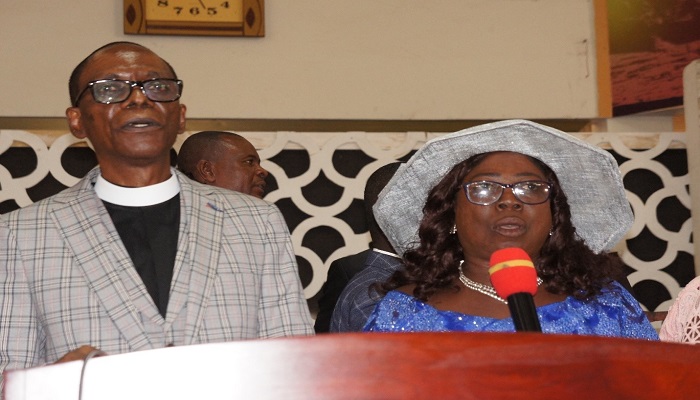 A welcome service was organised at the auditorium of Dansoman SSNIT Pentecost International Worship Centre (PIWC) on Sunday, September 15, 2019, to induct into office the new Area Head of the Dansoman Area, Prophet Ebenezer Kofi Appiah and his family.

Prophet Appiah was transferred from Bogoso Area in the Western Region to replace Apostle Onyinah Gyamfi, who had served in the Area for four years.

In his address, Prophet Appiah promised to work with all persons by involving everyone who matters in the decision-making process for the betterment of the church to achieve the best for the Area.

He thanked the Chairman, Apostle Eric Nyamekye, and the leadership of the church for their sterling leadership style. He also extended his appreciation to all pastors, officers and members in the Dansoman Area for their warm reception.

His wife, Mrs Janet Adwoa Asantewaa Appiah, expressed her appreciation to all and sundry, especially the leadership of the Area Women’s Ministry, headed by Deaconess Comfort Anane Poku, for receiving them whole-heartedly.

The Kaneshie Area Head, Apostle Mike K. Etrue, in a sermon on the topic, “Keeping and Protecting Our Precious Gold as We Grow as a Church,” urged Prophet Appiah to consider all persons entrusted in his care in the Area as valuable people who could contribute immensely in advancing the work of God.

Making references to 1 Kings 14:25-27, 2 John 1:8, 1 Kings 11:9-13, Apostle Etrue stated that Solomon and Jeroboam lost it as a result of love for foreign women and their gods, and failure to heed to wise counseling.

He, therefore, urged the new Area Head to involve all calibre of persons in the decision making process. “Use everyone who is ready to help, for they matter,” he said.

Apostle Etrue added that Christians have been entrusted with legacies likened to gold which ought to be kept well. These include holding on to their salvation, church discipline and be heavenly-minded.

According to him, as the church grows, some members take things for granted and thereby practice immorality, become unfaithful in tithing, and avoid attending evening services.

“Sometimes we forget our responsibilities such as failing to speak against evil practices within the church, coupled with the situation in which we have a lot of inactive officers,” he bemoaned.

He entreated the congregation to pray for mercy and forgiveness from God and go back to their first love.

The service was attended by the Deputy Greater Accra Regional Minister, Hon Mrs Elizabeth Sackey, who is also a Deaconess of the Church in the Achimota Area, among many others.