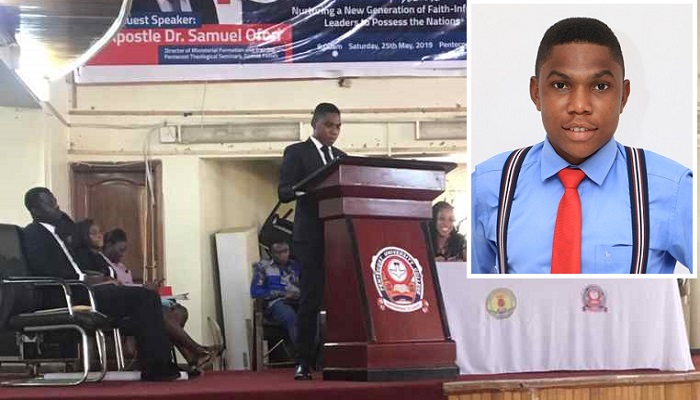 Mr. Daniel Asomani has been sworn in as the Student Representative Council (SRC) President of the Pentecost University College (PUC), for the 2019/2020 academic year.

Mr. Daniel Asomani became the 18th SRC President of the University after obtaining an overwhelming endorsement in the student elections, which took place in the month of May.

Mr. Asomani polled 54% of total vote cast, fending of his competition from the other aspirants.

The handing-over ceremony, which was held at the James McKeown Auditorium, was officiated by Honorable Elvis Hammond (retired), the Deputy Speaker of the University’s Parliament.

In his acceptance speech, the newly-elected SRC President, thanked the student body for the resounding support they gave him, long before his political ambition.

Mr. Asomani also acknowledged VODEC, an on-campus entrepreneurship organization that empowers students in entrepreneurship and leadership, which he founded, for the immense support which significantly contributed to his victory.

According Mr. Asomani, he is on a mission to restore the confidence and transparency in the office of the SRC. “Over the years, student’s faith in the SRC has diminished. Students feel that the SRC is not living to its true potential. But I believe that our massive endorsement would revive the spirit of student activism,” he stated.

The Dean of Students, Mr. Paul Danso, in turn, admonished leaders not to compromise in executing their duties and reinforced the message of service to God and service to humanity. He also urged the student leadership to align themselves with the leadership of Christ Jesus.

On his part, the Vice Rector of the University, Professor K. B. Omani Antwi, also called for students to be transparent and put up their best effort to effect change in the university and society.

He also advised the new leadership of the SRC to work hard in order to leave a lasting legacy for posterity.