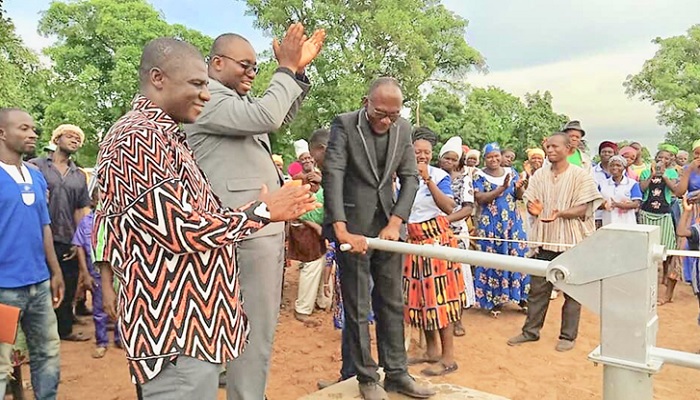 The Dabo District of The Church of Pentecost has constructed a borehole for the Kachuu community within the Wa West District of the Upper West Region in line with the Church’s Vision 2023.

The hand-pump borehole, which cost GH¢12,000, was funded by Mr. Godson Nyahe and Mrs. Patience Owusu Nyahe, both members of Silver Spring Central Assembly in the Maryland District in the United States of America.

Speaking at a brief presentation ceremony, the Dabo District Minister, Pastor Chris Ameyaw attested to the difficulty in assessing water within the community. “Anytime I visited the community, I had to wait for long hours before members gathered for Church Service, and the general complaint was the pressure on the borehole,” he explained.

The Kachuu community, which has a population of over 500 people, had only one borehole, which served the entire community. This made water a very scarce commodity in the Area. The women spent long hours in long queues just for a chance to use the borehole.

Pastor Chris Ameyaw further indicated that “a borehole for the community became one of my most fervent prayer topics and by the special grace of God it has come to fruition to the great relief of the people of Kachuu.”

The people of Kachuu were predominantly idolaters until December 2018, when The Church of Pentecost, through the Dabo District, reached the community with the gospel message of Jesus and began to “possess” it.