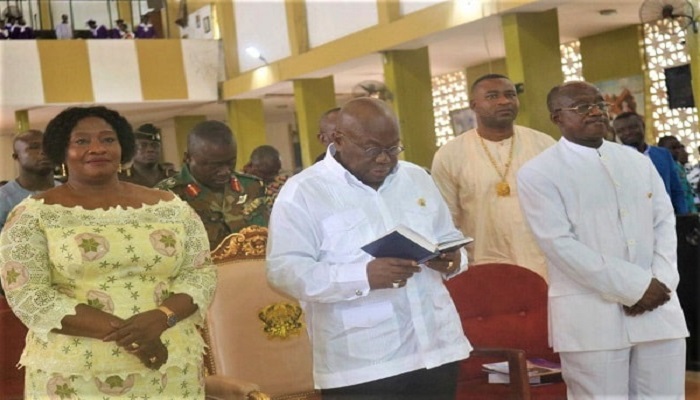 President Nana Addo Dankwa Akufo-Addo has given an assurance that so long as he remains President, there is no way Comprehensive Sexuality Education (CSE) will be introduced into the school curricula.

Allaying the fears of Ghanaians about the possible introduction of the CSE, he said the rumour was false and urged parents to disregard it.

Speaking at a service to climax the St Cyprian’s Anglican Cathedral Week in Kumasi yesterday, President Akufo-Addo declared: “I am a Christian and this, certainly, is against my Christian values.”

Himself an Anglican, PresidentAkufo-Addo told the congregation at the packed cathedral at Fante New Town in Kumasi that the main purpose of introducing the free SHS policy was to empower the youth and develop their human capital.

“I did not introduce the policy to teach our children CSE,” he said in Twi, adding: “The free SHS is to make our children competitive and not to corrupt them.”

The Anglican Week was on the theme: “Strengthening the Anglican faith: The role of the St Cyprian’s Anglican Cathedral.”

Among the activities that marked the celebration was a night of hymns and choral music.

Marked on the 16th Sunday after Trinity, the week is used to trace the history of the Anglican Church and how it was established in the Ashanti Region.

The government has come under a barrage of criticisms from religious leaders, civil society groups and concerned individuals and institutions for allegedly introducing CSE into the school curricula.

Although the educational authorities have denied the allegation on several platforms, the explanation given has not gone down well with many people, who asked the government to come clear on the CSE.

Last Friday, the Minority in Parliament had held a news conference, during which it called on the President to state his position on the matter.

They pointed out that the President’s silence was not helping matters and only went to confirm the general belief that the government had something to hide.

The President is on a week-long tour of the Ashanti and Bono regions to inspect projects and interact with traditional and religious leaders and party faithful.

The Archbishop of the Anglican Diocese of Kumasi, the Most Rev. Prof. Daniel Yinkah-Sarfo, described President Nana Addo Dankwa Akufo-Addo as “godsend” whose two years in office had led to the introduction of key policies to transform Ghana.

He described the President as the David of Biblical fame and urged him to soldier on with his policies, including the free SHS, and not be distracted by his critics.

“Don’t be afraid, fight on, for God is with you,” Rev. Prof. Yinkah-Sarfo said.

The Archbishop, who is also the Primate and Metropolitan Archbishop of the Anglican Province of West Africa and Internal Province of Ghana, said rather than criticise the government, Ghanaians should support him in his fight against corruption, poor sanitation and the ills of society.

“It’s time for us, as a people, to work hard, support the President and stop the pull-him-down attitude,” he said.