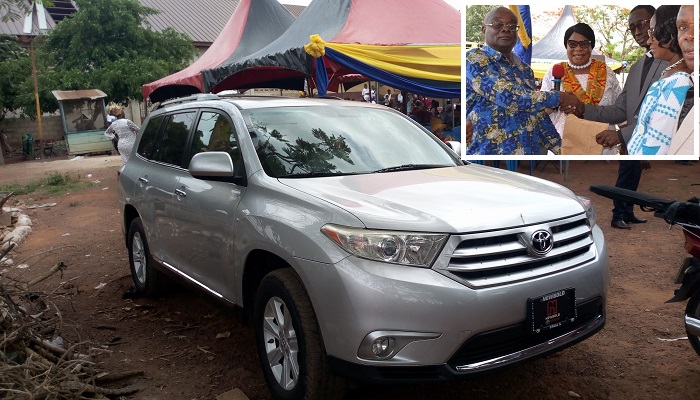 The couple presented the documents and the key to the vehicle to Pastor Ofei-Badu on Sunday, April 21, 2019, during the climax of the New Tafo Zone Easter Convention at Krofrom M/A Division School Park.

The Area Head, Apostle Samuel Antwi, who was much impressed with the kind gesture by the couple, prayed fervently for them and invoked God’s blessings upon their lives.

In response, Pastor Ofei-Badu (Rtd.) who never envisaged the gift, was thankful to the Most High God for laying their concerns on the heart of the Amponsah Marfo family. He revealed that the couple has been a blessing to his family because they supported them in completing their house project when they retired from the active ministry of the Church. He, therefore, expressed his unfeigned gratitude to the couple for their great benevolence towards his family.

He further acknowledged the Area Head, the Area Executive Committee, the pastorate and the entire congregation for their prayer support.

Pastor Samuel Ofei-Badu, who was once the District Minister for Sepe-Buokrom, retired prematurely from active ministerial service of the Church on Sunday, November 26, 2017, following his ill health.