Couple Blessed With A Child After 8 Years Of Marriage 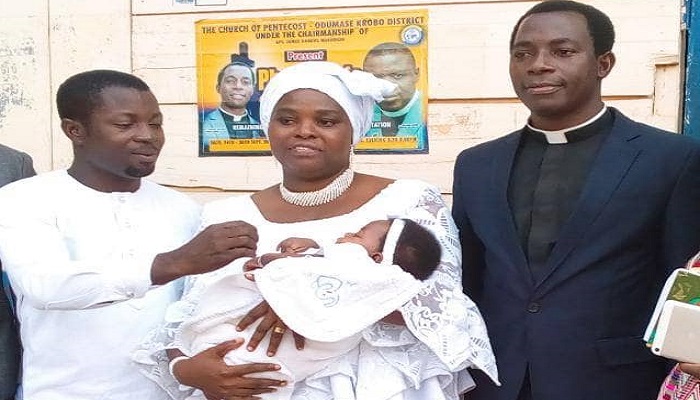 Couple Blessed With A Child After 8 Years Of Marriage

Mr. William and Mrs. Eunice Amisayo Gyan who fellowship with the Atua English Assembly of the Odumase Krobo District in the Agormanya Area of The Church of Pentecost have been blessed with a baby girl after eight years of marriage.

The couple got married in 2010 with high hopes of the fruit of the womb, but the situation proved otherwise.

Mr. Gyan said: “We devoted ourselves to fervent prayer, however, we visited several hospitals in the country for medical intervention but to no avail.

“In the year 2017, I planned traveling to India with my wife for a higher level of medical intervention upon advice by some specialists who had come from India. While plans were underway, I heard a voice one night that told me to terminate the trip.

“Consequently, I was told to give one-tenth of the amount that the journey would have cost as an offering at church. Few months after giving the offering, my wife conceived.”

According to Mr. William Gyan, pressure from many angles was mounted on them but they kept praying fervently while believing God for a breakthrough.

On 14th September 2018, the couple was blessed with a baby girl at the Volta River Authority (VRA) Hospital at Akosombo.

The District Minister of Odumase Krobo, Pastor Abubakari Issah-Gustav, dedicated the child on 30th December 2018 at the Atua English Assembly.

The couple could not hide their joy, likewise the church members for what the Lord has done.