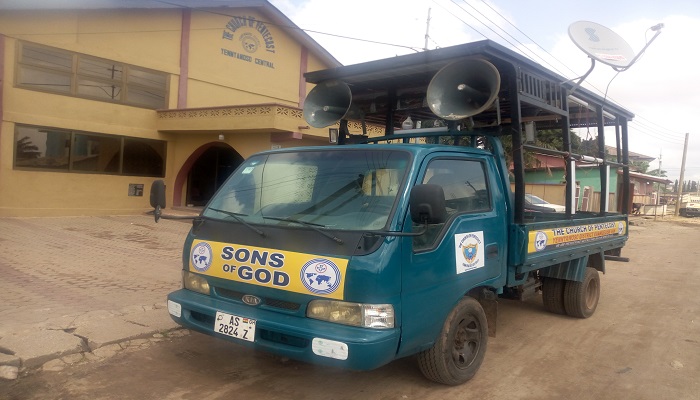 Mr. Kwame Duodu Amponsah, a member of Grace Assembly in the Yennyawoso District of New Tafo Area of The Church of Pentecost, has donated a KIA truck to the District Evangelism Ministry to facilitate the work of the ministry.

The truck, which is equipped with solar panels, speakers, horn speakers, 36″ LCD Flat Screen TV and a projector, was presented to the church on Tuesday, October 8, 2019, at a brief ceremony held at the forecourt of the Yennyawoso Central church building.

Speaking at the ceremony, Mr. Duodu said the donation is meant to facilitate the evangelism drive of the church and to ensure the effective discipleship of new converts in the faith.

Reading from John 15:16, he recounted how the souls he once won were later lost through false teachings of other religious sects. “Many souls are perishing; many are also moving from the faith because they are not well-grounded. Our mandate as Christians is to save the lost and ground them in the faith.

“As I was pondering over this, it just dawned on me to do something to salvage the situation, hence the donation,” he revealed, adding, “This is just a smaller fraction of a bigger one to come.”

Mr. Duodu was hopeful that the donation would boost the efforts and the activities of the Evangelism Ministry so that souls won will be discipled to become mature Christians who would in turn disciple others.

He also pledged to support the church’s evangelism drive in every possible way by fueling the truck and catering for the expenses of the evangelism team whenever they embark on an evangelism outreach.

The District Minister, Pastor Charles Oduro, who received the truck on behalf of the ministry expressed great appreciation for the kind gesture. He thanked Mr. Duodu for the effort made to support the ministry.

Pastor Oduro assured that the truck would be put to good use to achieve the intended purposes.