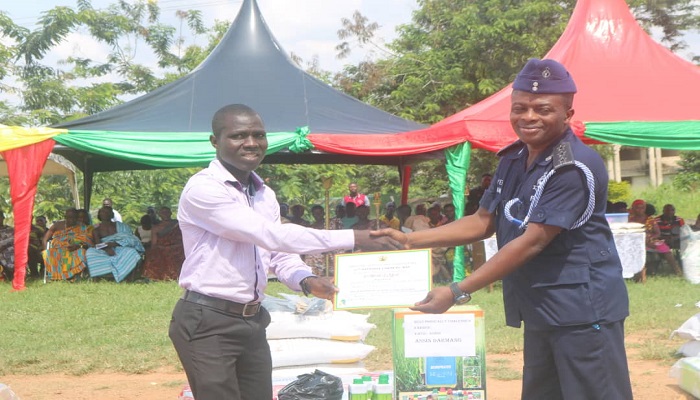 The Presiding Elder of Assin Dawomako Assembly in the Assin Akrofuom District of The Church of Pentecost, Elder Prosper Akoto Osei, has been adjudged the 2019 District Best Youth in Agriculture Farmer for Assin South District.

He received the award during the Assin South District 2019 Farmers’ Day celebration which took place at Assin Darmang last year. For his prize, Elder Akoto Osei took home a certificate, a queen-size mattress, wheelbarrows, a knapsack spraying machine, machetes, and a push bicycle, among others.

The 29-year-old young man who graduated from the Cape Coast Technical University with a Higher National Diploma (HND) in Accounting, is passionately into agriculture. He is currently working on a 28-acre field which comprises eight acres of oil palm plantation, 12 acres of cocoa farm and five acres of cassava farm, among others. He also rears a number of goats, pigs, poultry and snails.

Interestingly, aside from farming, Elder Akoto Osei is a Nations Builders Corps (NABCO) personnel who works at the District Magistrate Court at Nyankomasi-Ahenkro.

Presenting the prize on behalf of the Ministry of Fisheries and Aquaculture Development, the District Police Commander,  DSP Okyere Andam, commended Elder Akoto Osei for his diligence to work and encouraged the youth to emulate his positive attitude towards farming.

The Assin South Member of Parliament (MP), Hon. Ntim Fordjour, also advised unemployed graduates in the area to develop an interest in agriculture in order to make them financially independent.

Members of The Church of Pentecost present at the ceremony who were overwhelmed with the award thanked God for the positive development.

Present at the ceremony were the Paramount Chief of Atandanso Traditional Area,  Osabarima Kwantwi,  the Chefs and Queen Mothers in Assin South District, the Clergy, and members of the general public.