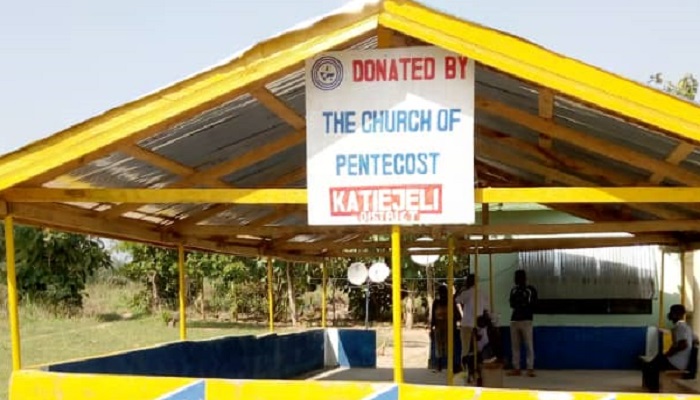 The Katiejeli District in the Kete Krachi Area of The Church of Pentecost has constructed a Pavilion worth GHS 5,735.00 for the Katiejeli Community-based Health Planning and Service (CHPS) compound in the Kpandai District.

Speaking at a brief handing-over ceremony, the Katiejeli District Minister, Pastor Ernest Secko, said that the leadership of the church were moved by the sight of people sitting in queues under the scorching sun and sometimes in the rain for their turn to be served whenever they come to the compound.

‘We discussed it with the members who saw the need and came together to put up the infrastructure for the community.”

According to him, individual members of the church contributed an amount of GHS 3,500.00 to the project, whilst the rest of the construction cost was raised during the District Week observance.

Handing over the facility to the community, the Kete Krachi Area Head, Pastor Joseph Danzerl said that the donation is in line with the ‘Possessing the nations” agenda of the Church

He encouraged the community to help maintain the facility since it has been constructed to curb the challenge of overcrowding faced by patrons when they come to compound.  He also advised patrons and workers at the compound to take proper care of the facility to prolong its lifespan.

The Chief of Katiejeli, Nana Adjabasu I, who received the donation on behalf of the community, thanked the Area Head and the District Minister, Pastor Ernest Secko, for the thoughtful gesture and continuous support to the community.

“I am very grateful for this move of love shown by The Church of Pentecost. I, therefore, encourage the other Churches here to emulate this kind move,” he said.

Present at the ceremony were the Area Secretary, Pastor David Akayue, and a cross-section of the Area pastorate and their wives.