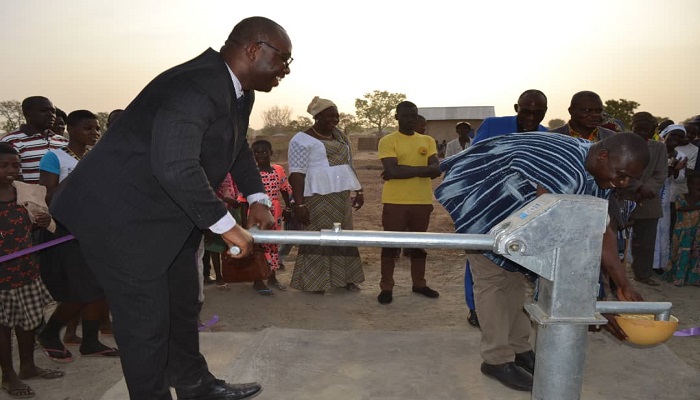 The Dabo District of The Church of Pentecost has handed over a borehole to the Gomali community in the Wa West District of the Upper West Region.

Narrating the antecedents that led to the construction of the borehole, the District Minister for the Dabo, Overseer Chris Ameyaw, said the people of Gomali prior to the drilling of the borehole, mainly depended on a stream as their main source of water.

“Although there was a borehole in the community, it had become a white elephant because it was cited at a location with low water table. Water therefore did not flow as expected when being pumped, and to worsen the situation, the little water that came out was mixed with sand,” he said, adding that the people reverted to a stream where they competed with animals and filth.

Overseer Ameyaw said upon several appeals to the district assembly and the Church, the Teshie-Nungua Area of The Church of Pentecost, led by Apostle Dr. Alfred Koduah, came to the aid of the community by funding the water project.

Speaking on the theme, “Water is Life,” the Wa Area Head of The Church of Pentecost, Apostle Robert Andoh, said that though it is good for communities to acquire basic necessities like water and electricity, it is more beneficial to seek for and acquire eternal life which comes through Jesus Christ.

Reading from John 4:4-26, Apostle Andoh said the Samaritan woman was diligently protecting a well that could not produce eternal water until she met Jesus who told her everything she ever did.

“This borehole will in no doubt serve the water needs of residents, especially school children but beyond this, you need to seek for Jesus Christ, the Saviour who gives eternal water and embrace Him,” he said.

The Area Head used the opportunity to introduce Jesus Christ to the gathering and urged them to accept Him into their lives so that He would give them eternal life.

Commissioning the borehole, the District Chief Executive (DCE) for Wa West, Hon. Edward Saabo Laabir, lauded The Church of Pentecost for the intervention, saying, “It is very timely and relevant.”

The DCE said the district is faced with myriad of challenges and needed the support of benevolent individuals and organisations to augment the efforts of government in developing the area.

Hon. Laabir urged the chief and elders of the area to form a committee that would regulate the use of the water and also raise capital to undertake maintenance works on the facility.

The Chief of Gomali, Naa Bafaara Dapilah, could not have been less grateful as he took his turn to pour out his appreciation to the Church for the gesture.