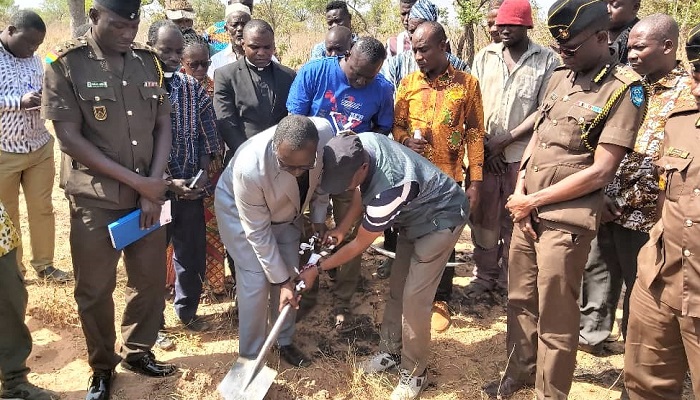 The Church of Pentecost (COP) has officially begun the construction of a correctional facility at Damongo in the Savannah Region for the Ghana Prisons Service.

The facility, which is the fourth to be constructed by the church, is part of efforts to decongest Ghanaian prisons.

The sod-cutting ceremony to commence the construction of the facility was performed by the Sawla Area, Apostle William Ohemeng Kwakye, on behalf of the Chairman of the church, Apostle Eric Nyamekye, on February 5, 2020. Present at the event were the Savannah Regional Minister, Hon. Salifu Adam Braimah, and some officials of the Ghana Prisons Service.

Speaking at the ceremony, Apostle Ohemeng Kwakye indicated that the church is delighted to partner with the Ghana Prisons Service and the traditional council to undertake the project.

“We all know how congested the prison camps in the country are, and, therefore, we believe that after the completion of the facility, the issue of congestion will be a thing of the past,” he said.

He said that the new facility, which is to be completed in 8 months, would be able to house 300 inmates. “This facility will not only be bigger than the Tamale prison, but it also has other facilities such as a recreational centre, an administration block, kitchen, washrooms, worship centre and two dormitories,” he said.

The Regional Minister, Hon. Salifu Adam Braimah thanked the leadership of the church for the laudable initiative and the Ghana Prisons Service for sitting the project in the region. He assured that he would always be there to supervise the progress of the work until its successful completion.

Prior to the sod-cutting, the Regional Minister led the team to the Jakpa Palace to seek the blessings of the Gonja Overlord and also share the details of the project with him. The team expressed their profound gratitude to him for making 2000 acres of land available for the project.

In addition to the Damongo Holding facility, The Church of Pentecost is constructing correctional facilities at Ejura, Nsawwam and Obuasi