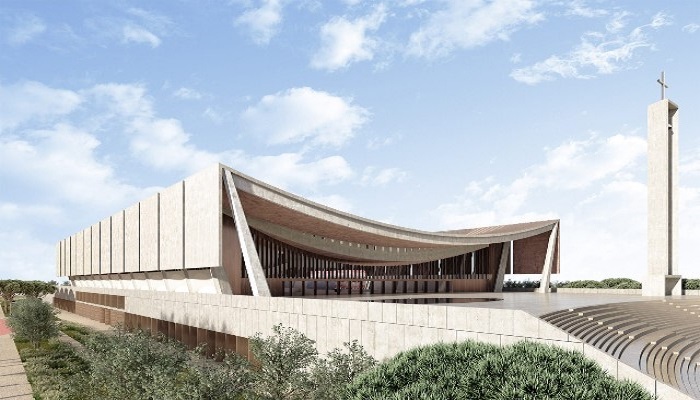 Preparatory work for the construction of Ghana’s maiden National Cathedral has started in earnest. Conceived as a physical embodiment of unity, harmony and spirituality, the National Cathedral, which is on a 14.5-acre land and estimated to be completed in four years, will be the nation’s ceremonial landmark, Ghana’s Mother Church, where all Ghanaians can gather, worship and celebrate in spiritual accord.

All but three of the buildings that accommodated some Judges who were living in the area have been pulled down. The remaining three buildings have been stripped of their roofs, doors and windows in readiness for demolition. The Passport Office, the residence of the Malian Ambassador, the Offices of ComSys, a Communication Services Provider, and the Offices of the African Centre for Economic Transformation (ACET), an economic research institute, which had also been earmarked for demolition, have, however, not been touched.

According to the Executive Director of the National Cathedral of Ghana, Dr. Paul Opoku-Mensah, the programme to build the cathedral is in course and by March, next year, real construction work would begin. He stated that the key partners of the project had not wavered on the task and have given an assurance that once construction starts next year, it would be completed in a period of four years.

He told the Daily Graphic that the land at Ridge in Accra, which had been secured for the project, was being cleared of structures and a procurement strategy was also being worked on.
Dr. Opoku-Mensah said the procurement strategy, which was yet to be approved by the government, involved a partnership between Ghanaian and foreign contractors with a minimum of 70 percent of the contractors being Ghanaian.

He indicated that within the next two months, the procurement strategy would be ready after which discussions would be held with the government for approval.

Dr. Opoku-Mensah said accounts had been created at the GCB, ADB and Fidelity banks into which some monies were being paid by private entities as part of the fundraising. He added that measures were being put in place in the United States for money to be raised for the construction.

“A fundraising campaign was launched on December 28, 2018, for the project at which President Nana Addo Dankwa Akufo-Addo promised GH¢100,000, towards the project,” he noted.

Dr. Opoku-Mensah declined to mention how much had been raised so far, but was quick to add that considering the interest the construction of the cathedral was generating and the transnational coalition of the cathedral project that had been put in place, money would not be a problem.
He said information regarding how much had been raised would be made public when the financial structures were put in place.

He explained that the Board of Trustees of the National Cathedral of Ghana and the Cathedral Secretariat had initiated moves to put in place a transparent audit process to track and account for all monies raised and until that was completed, it would not be prudent to put figures out.
According to him, the services of PricewaterhouseCoopers, an audit firm, had been secured to put in place a robust financial infrastructure for the project.

Dr. Opoku-Mensah assured Ghanaians of transparency, adding that the Board of Trustees would apply a high level of accountability.

Commenting on the eviction process, Dr. Opoku-Mensah said the cathedral was a sacred project and, therefore, entities, which had to vacate the land, would not be kicked out without the secretariat and the board being part of their relocation process. “These are high-level installations which we cannot go and kick out; we have to be part of the relocation process,” he said.

Adding that the board was part of the process of relocating the judges whose houses were situated on the land and which were marked for demolition. He noted that the sacred nature of the project made it imperative to implement it differently from normal political projects.
“We cannot situate the project within the divisive politics of the country,” he explained.

On the location, Dr. Opoku-Mensah said a national cathedral must be close to the centre of political power due to the nature of functions that are held or would be held there. Citing the example of Norway, he said its National Cathedral was along a ceremonial route close to the King’s Palace and added that after coronations, the new King usually strode on the street from the cathedral to the palace amid cheers.

It was, therefore, not appropriate to site the project elsewhere as some had suggested.
He urged Ghanaians to make the cathedral a place of inspiration and a setting where great ideas and values which shape society are discussed rather than a place of contention.
“The cathedral will be a building that ties all our important events that define our identity,” he said. Adding “the cathedral is a place of reconciliation and addresses a missing link in the country’s infrastructure.”

On the brouhaha that characterized the announcement of the construction, Dr. Opoku-Mensah said he was confident that Ghanaians would appreciate the building and consider it a national treasure once they see it on completion.

According to him, in Norway, when the announcement of the construction of a national cathedral was made, many kicked against it. However, 150 years after, Norwegians consider it one of their greatest national assets.