The Church Of Pentecost To Construct Police Station At Akropong 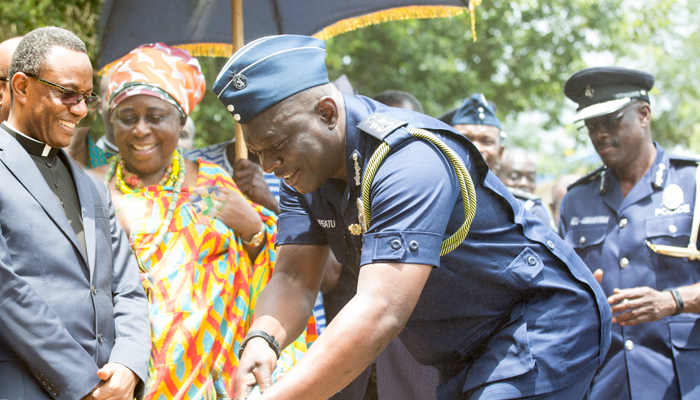 The Church Of Pentecost To Construct Police Station At Akropong

All is set for The Church of Pentecost to begin the construction of a one-storey District Police Headquarters and auxiliary facilities for the Ghana Police Service at Akropong-Akuapem in the Eastern Region.

The Inspector-General of Police (IGP), Mr. David Asante-Apeatu, on Friday, April 26, 2019, joined the leadership of the Church, led by the General Secretary, Apostle Alexander Nana Yaw Kumi-Larbi, and the chiefs and people of the Akuapem Traditional Area to cut the sod to commence the construction of the facility.

The facility, which will take less than a year to be completed, is the first of three others to be constructed for the Ghana Police Service by The Church of Pentecost in line with the Church’s 5-year strategic vision dubbed ‘Vision 2023’ of Possessing the Nations.

Speaking at the ceremony, the IGP said the dream to have a newly constructed police station at Akropong dates back years in his life as a police officer which he has fervently prayed for its realisation. “Coincidently, my prayer has been answered as God decided to use The Church of Pentecost to fulfil this dream,” he indicated.

He added by saying that, “The Church of Pentecost has been a strategic partner over the years and I will neither attempt to eulogise their contributions to Police development nor their effort to bring the message of salvation in Jesus Christ to mankind.

“When I had information that The Church of Pentecost irrespective of its numerous support for Police development in the past, has decided to construct three new Police stations in support of the Police Transformation Agenda and that my dream of having a newly constructed Police station in Akropong was going to be fulfilled, I have remained excited until today that I am officially joining you to cut the sod for the beginning of the construction.”

Mr. Asante-Apeatu said that the Police Administration is not only delighted by the construction of the facility but excited about the role that the facility will play in reducing crime in the municipality which is gradually gaining ground as a tourist destination due to its high altitude and good weather all year round.

The IGP called on the residents to partner with the police to climb down on crime in the area by volunteering information about suspected criminals to the police to enable the police work on them in a more proactive manner, saying, “The Police cannot be effective without your support and this great gesture by The Church of Pentecost should be a motivation to many other organisations who believe in the strategic role of the police in our democratic journey as a nation.”

The General Secretary of The Church of Pentecost, Apostle Alexander Nana Yaw Kumi-Larbi, speaking on behalf of the Chairman of the Church, Apostle Eric Nyamekye, said initially the facility was designed for Police station but considering a special appeal from the IGP coupled with the envisaged jurisdiction the facility would serve, the Church decided to add a few rooms to upgrade it to a district headquarters.

Apostle Kumi-Larbi revealed that in May last year, the Church constructed a Police Station and accommodation facilities for the Millennium City District Police Command and also donated a double cabin pick-up vehicle to the Command to facilitate their patrol activities. The Church, he added, also donated an audio-video editing equipment to the Public Affairs Department at the Police Headquarters.

“To further enhance the relationship we have with the Ghana Police Service and to also assist the Service in promoting law and order in the country, the Church, as part of its Vision 2023 (a five-year vision document of the Church), has initiated a security-based development project dubbed ‘Police Station & Post Project (PSPP).’

“This initiative seeks to put up police stations/police posts in some selected deprived and insecure areas. As indicated earlier, this facility for which we are witnessing its sod-cutting today, is part of this project. As a church, we believe this will be our contribution to government’s efforts to enhance the security situation in our communities.

“We wish to express our sincere appreciation to the leadership of the Ghana Police Service for buying into this vision.

“It is our hope that with this partnership between The Church of Pentecost and the Ghana Police Service, security will not only be brought to the doorstep of the people but together, we shall work to ensure that our communities are safe to live in, culminating in creating the needed peaceful atmosphere for the development of our dear nation.”