Church Leaders Advised To Build An Intimate Relationship With Christ 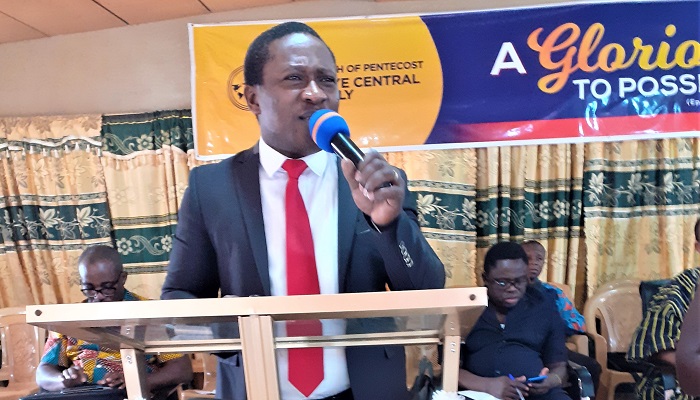 Church Leaders Advised To Build An Intimate Relationship With Christ

The Odorkor District Minister of The Church of Pentecost, Pastor Abraham Addae Agyemang had advised ministers and their wives to build an intimate relationship with Christ.

Pastor Addae Agyemang said this on Tuesday 11th February 2020, in a sermon entitled, “The Minister and Wife as Bride of Christ” during the Ministers and Wives session of the Wa Area Apostolisation, held under the theme “A Glorious Church to Possess the Nations.”

The Odorkor District Pastor defined bride as a woman who is about to be married or who is newlywed. He explained from Genesis 2:21-22 that, just as the woman was formed from the rib of man, the church was also birthed from the side of Christ where blood and water flowed on the cross.

Reading from Ephesians 5:22-32, he further established that the Church is the bride of Jesus Christ which includes the minister and wife.

He differentiated between the Bride and Bridesmaid and said that whereas the bride is the focus of attention for the bridegroom, the bridesmaid attends the marriage ceremony just to offer support. He asked Ministers and Wives to take an introspective look at their lives whether they are the bride of Christ or just a bridesmaid. “Brothers and Sisters in the Lord, are you a bride or bridesmaid of Christ? You see, you can be busy for God but not busy with God, let us be wary of this,” he admonished.

He explained further that, after the marriage ceremony, the bridesmaid loses her essence in relation to the marriage but not the bride. He reminded ministers and their wives not to assume the role of a bridesmaid, but to be the genuine bride of Christ so that after their work on earth is completed, they would be with Jesus forever.

Pastor Addae Agyemang indicated that for any marriage to be recognized, there must be intimacy between the Bridegroom and the Bride but not with the Bridesmaid. “Since Christ called you to be his bride, you must have an intimate relationship with Him through holy living, prayerful lifestyle and consistent study and meditation on God’s word,” he elaborated.

The bridegroom is always passionate about the bride and protects her. “Jesus is passionate about His Church as well as the Minister and Wife that He has called for the work of ministry, and will always be with you according to Matthew 28:18-20,” he said.

He indicated that intimacy is the activity that results in pregnancy. “When we are intimate with Christ, we carry his burden for souls and will do his work with dexterity,” he noted.

The Odorkor District Pastor established that the bridegroom provides for the needs of his bride. He encouraged the ministers that Christ who called them will meet their needs as they carry the bidding of Christ in their heart and execute same.

Referencing Genesis 5:21-23, he added that the pregnancy could result in the birth of nations. He challenged Ministers and Wives to work with Vision 2023 of The Church of Pentecost so that Christ will use them to birth nations through evangelism and possess them for His glory.

Further, Pastor Addae Agyemang said that intimacy with Christ is borne out of genuine love as recorded in 1 Corinthians 13:1-8. He challenged ministers to offer genuine and unconditional love to Christ and the work they have been called for. “In this genuine love for Christ, Ministers and wives should celebrate and encourage one another and there would not be bitterness over where one is sent to minister,” he said.

Once Ministers and Wives are intimate with Christ, God will grant all the needed resources including the anointing to transform lives, heal the sick, raise the dead and possess the nations. “God used our fathers to do exploits and if we too will be intimate with Christ as His bride, He will use us for His glory and achieve the goal of making disciples prepared to meet their bridegroom”, he stated.

The message which was preached with enormous charisma and intermittent fervent prayer was concluded with John 14:12-13. According to him, Pastor Abraham Addae Agyemang that, when Ministers and Wives become intimate with Christ as His bride, they would do exploits in their respective ministries.