Christmas Is All About Jesus And Salvation – Apostle Kumi-Larbi 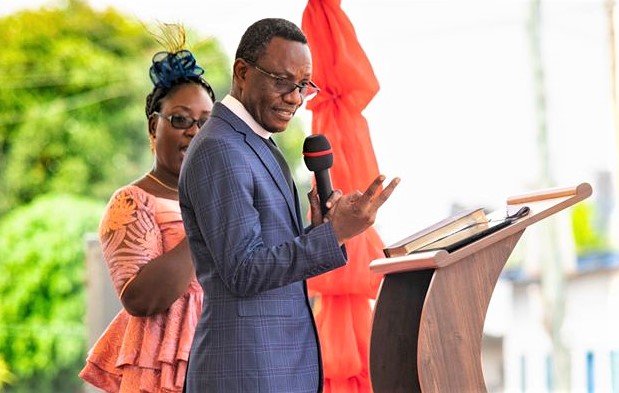 Christmas Is All About Jesus And Salvation – Apostle Kumi-Larbi

The General Secretary of The Church of Pentecost, Apostle Alexander Nana Yaw Kumi-Larbi, has stressed that Christmas is not just a secular holiday but the celebration of the birth of Jesus Christ who died to atone for the sins of humanity.

According to him, it is important for Christians to celebrate their belief in the birth of Christ with meaning so that Christmas does not lose its religious and spiritual significance (relevance).

“Christmas is all about Jesus and our salvation. It is a time to put everything aside, make Jesus our priority, seek to have an encounter with Him, worship Him, honour Him with our substance, have true repentance and share our Christian experiences with others,” he said.

Apostle Kumi-Larbi said this when he joined members of Osu District in La Area on Sunday, December 29, 2019, to climax the Christmas Convention.

Speaking on the topic: “Christmas; Our Response To The Good News,” the General Secretary pointed out lessons that Christians could learn from the response of the Shepherds (Luke 2:8-18) and Wisemen (Matthew 2) after they had received the Good News about the birth of Christ.

In his sermon, he pointed out that the Shepherds were the first people to receive the information about the birth of the Saviour although they were not highly esteemed in society at the time. This, he said, underlines the fact that God chooses the weak in the world to shame the strong; He chooses what is low and despised in the world, even things that are not, to bring to nothing things that are, so that no human being might boast in His presence. (1 Corinthians 1:25-29)

Apostle Kumi-Larbi also observed that, after receiving the Good News, the shepherds immediately took action and set off to see the miracle for themselves.

“They were at post guarding their flocks when they received the Good News, but they left what they were doing and hurried off to Bethlehem in search of the Baby Christ,” he said.

Another observation the General Secretary made was that, after the shepherds saw Jesus, they shared the story about what the angels had told them concerning the Child. (Luke 2:17)

He pointed out the fact that after the spectacular experience, the shepherds returned glorifying and praising God for all the things that they had heard and seen, as it was told unto them.

“They returned to their sheep, praising God and sharing the Good News with their colleague shepherds. This also means we can serve God exactly where we are, even at our workplace,” he noted.

Touching on the response of the Wisemen after receiving the Good News, the General Secretary said that they made it a priority to pursue the newborn King.

He further noted that the Wisemen left everything to go and worship Him. “In the same way, since the birth of Christ is the reason for the Christmas season, let us make time to worship Jesus instead of occupying ourselves with other social activities during the holidays,” he advised.

Apostle Kumi-Larbi again observed that the Wisemen were so focused that nothing good deter them from achieving their mission to meet the Baby Christ, not even King Herod.

He also pointed out that when the Wisemen found the Baby Jesus, they did not only worship Him with their words and their time, but they also did that with a generous offering of gold, frankincense and myrrh.

Finally, the General Secretary observed that the Wisemen, having been warned in a dream, departed in another way. This, he explained, signified that genuine worship of Jesus brings transformation and causes one to live a new way of life in Christ.

“Returning another way is what true repentance is. Anyone who has accepted Christ as Lord and Saviour is a new creation. Paul tells us in 2 Corinthians 5:17 that all believers have died with Christ and no longer live for themselves. Our ‘death’ is that of the old sinful nature, which was nailed to the cross with Christ. It was buried with Him, and just as He was raised up by the Father, so are we raised up to ‘walk in newness of life’ (Romans 6:4). That new person that was raised up is what Paul refers to as the ‘new creation.’

“To understand the new creation, we must first grasp that it is, in fact, a creation, something created by God. John 1:13 tells us that this new birth was brought about by the will of God. We did not inherit the new nature or decide to re-create ourselves anew. Neither did God simply clean up our old nature; He created something entirely fresh and unique. The new creation is completely new, brought about from nothing, just as the whole universe was created by God from nothing. Only the Creator could accomplish such a feat,” he explained.

Apostle Alexander Nana Yaw Kumi-Larbi, therefore, charged Christians to uphold the true significance of the Christmas season by proclaiming the Good News about the birth of Jesus to all people. He also advised them to make Jesus a priority during the Christmas season, observe Christmas as a period of worship, seek a personal encounter with God, worship Him with their substance and live a life of true repentance.