Christians Urged To Stand Up To Secular Humanism Philosophies 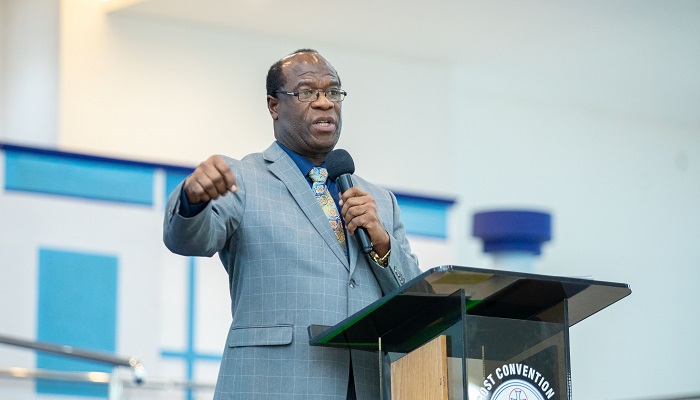 Christians Urged To Stand Up To Secular Humanism Philosophies

The Teshie˗Nungua Area Head of The Church of Pentecost, Apostle Dr. Alfred Koduah, has urged Christians to rise and use the word of God to refute secular humanism philosophies.

Presenting a paper on “Secular Humanism” at the ongoing November Heads’ Meeting at the Pentecost Convention Centre (PCC), Gomoa Fetteh, Apostle Dr. Koduah said that secular humanism has and continues to negatively impact Christianity in a profound way.

In his presentation, the Teshie˗Nungua Area Head explained Secular humanism to be a non-religious philosophy that rejects religion and the concept of the existence of God.

He said that, in addition to opposing the Christian faith itself, proponents of secular humanism have been promoting sexual freedoms and instant gratification with the view to destroying all the virtues Christianity stands for.

According to him, secular humanists hold the belief that human beings are responsible enough to be moral and good without any religious or supernatural beliefs. Ironically, they claim to create a happy world with happy and good people without God, who is the creator of humans and the world.

He revealed that the ultimate goal of secular humanism is to establish a new world religion that would be referred to as “A common faith”, accomplish a new economic system, a new race of people for the new world order who would control their own evolution, control their educational system and promote secular humanistic ideas through the media, legal systems, religion and the state. Thus, controlling every sphere of human endeavour.

“To achieve this, secular humanists think that they have to first destroy Christian beliefs and establish an anti-God, anti-Christ and anti-Bible principle globally,” he noted.

For this reason, secular humanists continuously attack and discredit the Christian faith in a bid to destroy it entirely. For instance, whilst the Bible teaches high standards of sexual purity, secular humanism is promoting sexual promiscuity in an unprecedented manner.

“By ushering the world into a sexual revolution, secular humanists have caused people to break away from the long-held notion of the sacredness of sexuality and caused them to experiment with free sex in and outside of marriage,” he explained.

He mentioned educational institutions, the media, books and other forms of literature, secular humanist agencies, local, national and international NGOs, advocacy and civil society groups, as well as the United Nations and its agencies as some of the channels through which secular humanism ideals are disseminated.

Touching on the Christian’s response to secular humanism, Apostle Dr. Koduah noted that the prevalence of secular humanism ideals is bad news for Christianity, hence believers must not look on unconcerned as secular humanists pursue their godless and ungodly agenda against God and the entire human race.

He, therefore, said that since Scripture is useful for teaching, rebuking, correcting and training in righteousness, it is important for Christians to use the word of God to confront these errors of secular humanism.

He cautioned that the philosophical war, that is, the battle for the minds of the people; the battle between worldviews, and the clash of cultures and ideologies, appears to be the greatest and fiercest battle being fought in the contemporary world. It, therefore, behoves Christians to get involved in this fierce battle by confronting and refuting such false teachings and doctrines that have the propensity to oppose the Christian faith and lead humanity astray.

In addition to continuously insisting on sexual purity and biblical absolutes (truths), he also urged Christians to make conscious efforts to influence decision-making processes at all levels and impact all spheres of life.

“Christians must also train mature Christians in journalism so that they can impact positively on the media landscape,” he added.

Concluding his presentation, Apostle Dr. Alfred Koduah asserted that it is possible for Christians to effectively deal with the threat that secular humanism poses to the Christian faith saying that “if the Apostle Paul was able to use Scripture to confront the philosophers of his time (Acts 17), then contemporary Christians with better resources should be able to deal with the dangers of secular humanism.”