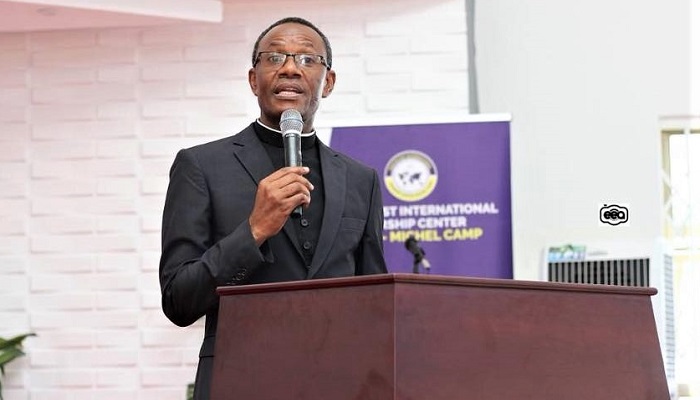 The General Secretary of The Church of Pentecost, Apostle Alexander Nana Yaw Kumi-Larbi has warned Christians that paying or accepting bribes in any form is an offence against God.

The Chief Scribe said this when he joined members of Pentecost International Worship Centre, Odorkor (PIWC-Odorkor) for church service on Sunday, February 9, 2020.

Preaching a sermon titled: “Bribery and Extortion” as part of a series of messages on the topic: “Living A Life Of Integrity As A Christian,” Apostle Kumi-Larbi expressed disdain about how the payment of bribes has become a common practice in Ghana, cautioning that “bribery is a characteristic of a corrupt society.”

He defined bribery as money, favour, or other consideration given in exchange for one’s influence against what is true, right, or just. “Any benefit given or accepted to influence decisions is a bribe. Bribery is an offence against God, the weak, the innocent and the community,” he explained.

Giving historical background of the act of bribery, Apostle Kumi-Larbi said that it was a customary practice of the ancient Israelites to offer gifts to people in authority as a sign of respect.

He, however, stated that such gifts were sometimes given as a form of bribe to influence judicial procedures. As a result, Moses, the leader of Israel at the time, cautioned the Israelites against bribery to prevent abuses in their legal system.

According to the General Secretary, laws against bribery were given to the Israelites by Moses to clamp down on the practice because it jeopardised justice and righteousness in society. He further quoted Exodus 23:8, Deuteronomy 16:19, Job 15:34 and Proverbs 17:23 to buttress the Bible’s categorical stance against all forms of bribery.

Apostle Kumi-Larbi pointed out that although receiving or paying bribes may bring temporary comfort; its consequences may be far-reaching.

He referred to the story of Judas in Matthew 26:14-16, who took a bribe to betray Jesus, an innocent man. He said that although Judas later regretted his actions, it was too late because he had caused the death of a righteous man.
He also narrated the story of Felix, the Governor who perverted justice by delaying the release of Paul from prison just because he wanted a bribe. (Acts 24:26)

“Governor Felix wanted a bribe. But Paul being innocent and a Christian did not give him one. As a result, he delayed Paul’s release from prison until another Governor replaced him. Here again, we see how bribery perverted justice, because justice delayed is justice denied,” he said.

Apostle Kumi-Larbi also cited the story of the soldiers charged with guarding Jesus’ tomb, who took a bribe from the chief priests and elders to lie about the disappearance of the body of Jesus in Matthew 28:12-15. He said that this lie told by the soldiers had hindered many Jewish people from believing in the resurrection of Jesus Christ even today.

“Many Jewish people have perished, and many more are going to perish because of the lie the soldiers told, and the blood of these people will be on their hands,” he lamented.

Apostle Kumi-Larbi, therefore, advised Christians to desist from paying or accepting bribes to grant favours as is the practice of many.

“From all indications, bribery perverts justice. It is a blinding influence upon wisdom and discernment. It clouds the truth and perverts or twists the words of those who would be righteous in the sight of God,” he said.

He advised Christians to do nothing out of vain conceit or selfish gain, be content with what they have, and uphold their integrity in all circumstances even if it costs them.

“Our God values honesty and truthfulness because they ensure a just society. The Christian who has integrity is sound, reliable, trustworthy and therefore could be described as dependable,” he advised.

Reading from Ezekiel 14:14, he urged Christians to aspire to be like Noah, Daniel and Job, whom the Bible gave glowing testimonies of as righteous men of their generation.

“Noah was a righteous man, the only blameless person living on earth at the time, and he walked in close fellowship with God. Job was blameless and upright, one who feared God and turned away from evil.

“Daniel so distinguished himself among the administrators and the satraps – the governors of the provinces – by his exceptional qualities, and no corruption was found in him because he was trustworthy and neither corrupt nor negligent. Let us also aspire to be the Noahs, Jobs and Daniels of our time by living a life of integrity.”