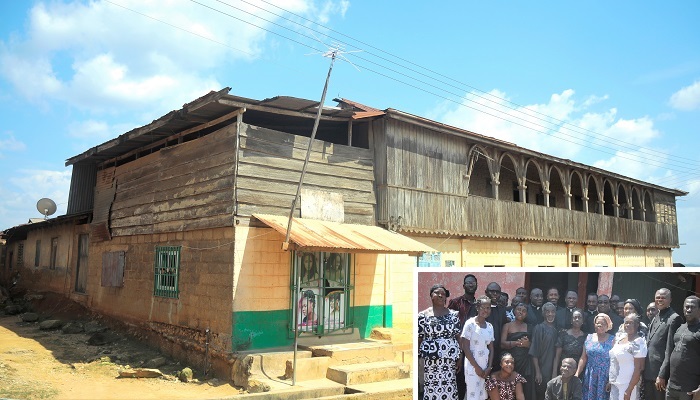 Asamankese is the capital of the Lower West Akim Municipality of the Eastern Region, with an estimated population of 39,435, according to the 2013 settlement population. The town is about 62 kilometres away from Accra, the national capital.

Buah (1980), A History of Ghana, posits that Asamankese was founded as a result of succession dispute that compelled Otomfuo (brass-smith) Asare to desert the family to form a new state or city called Asaremankesee: Asare’s big state. The modern city of Asamankese was originally founded and occupied by the Akwamu.

The name of Asamankese is synonymous with Pentecostalism in Ghana. Like the Azuza Street Revival which broke out in Los Angeles, Califonia in 1906 which saw the unprecedented outpouring of the Holy Spirit and the miraculous, Asamankese has been touted as the birthplace of classical Pentecostalism in Ghana, where the power of God was greatly manifested in the lives of His people in the Gold Coast era.

The Historic Visit
The Chairman of The Church of Pentecost, Apostle Eric Nyamekye, was in Asamankese on Saturday, November 9, 2019, to attend the funeral of the late Pastor Elijah Mahama Akpanyi, of the Asamankese District who was laid to rest on the said day.

There sits a century-old storey building located at the hilly side of Anum in the Asamankese Municipality. The basement of the compound house was built by concrete blocks, while the upper room where McKeown occupied was made of wood. The quality of wood used in constructing the Upper Room still puts it in good shape, though parts of the ground floor structure have broken down. The ground floor of the house was occupied by the owner of the house, Nana Kwabena Anyane, with his four wives and many children.

Opanyin Anyane Kwabena who was a big-time cocoa farmer and timber merchant housed Pastor McKeown when he arrived in the Gold Coast at the time the church was still constructing the mission house, a place which later became the ‘Power House.’

The two rooms and a hall apartment with kitchen and toilet had an underground water system which provided constant water to the house and neighbouring houses. The concrete underground water facility was fed by rainwater.

Taking the Chairman round the house, a grandson of Opanyin Anyane Kwabena, Elder Daniel Danso said his grandfather offered the apartment free of charge to the church to accommodate Pastor McKeown at the time the church was not done with his official residence.

He said since McKeown did not initially come with his wife, there were two women who served as house helps and a male cook to take care of the domestic chores.

The Construction of the Power House
Explaining how the place was named ‘Power House,’ a member of the family said Pastor McKeown personally got involved in the construction of his mission which eventually had a toll on his health and later contracted Malaria. When McKeown recovered and returned to Asamankese after receiving medical attention in Accra, the leadership of the church led by Pastor Peter Anim, shunned his company because they saw him as someone lacking “faith” and inappropriate to lead them. This led to a split which saw McKeown leaving Asamankese to form the Apostolic Church. She said after the exit of McKeown, Pastor Anim moved to the mission house and later moved to Accra when the headquarters of the CACI was moved to Accra.

According to her, the mission house was later turned to a prayer ground where members go for waiting. In the course of time, she said, a certain man who worked at the Ghana Water Works was transferred to the town, and having read and heard much of the spiritual awakening that happened in the town, he prayed to God to be endowed with that miraculous power. Upon receiving the anointing, he started serious prayers at the mission house which attracted people from far and near to Asamankese. It was at that point that the name of the mission house was changed to ‘Power House.” Currently, the Power House has been designated by the CACI as a place for spiritual renewal where people go and wait upon the Lord.

Special Appeal
The family during their interaction with the Chairman appealed to him to help them renovate the family house so as to give it a facelift and maintain its relics for posterity.

In his response, Apostle Nyamekye assured them of the church’s support. He commended the Anyane family for the warm reception they gave to Pastor McKeown to make his stay in Ghana enjoyable. “Your benevolence helped a great deal to have The Church of Pentecost established in Africa and the spread of the Gospel to other parts of the world. I believe it was through this singular act that has saved many of us,” he said.

At the Holy Ghost Temple
After interacting with the family, the Chairman and his entourage were led to the famous Holy Ghost Temple where a reminiscent of what has been recorded in Acts Chapter 2 (the Day of Pentecost) occurred in May 1923. Apostle Nyamekye and his entourage were met on arrival by Apostle Emmanuel Larbi Asamoah (Rtd.), the Forth General Secretary of the CACI, and the Asamankese Area leadership of the church, who narrated how events occurred during the time of Pastor McKeown and Peter Anim.

After that incident, many people came from all parts of the country to the temple to pray there to experience the Holy Spirit. Following the incident, the church building was named ‘Holy Ghost Temple.’

The First Outpouring of the Holy Spirit in the Gold Coast
Records are that one Stephen Kwabena Owiredu of Brekumanso, near Asamankese, was arguably the first person to have received the baptism of the Holy Spirit in Ghana in 1932 with the evidence of speaking in tongues.
The Arrival of James McKeown

Pastor James McKeown touched base on the Gold Coast on March 4, 1937, and was escorted straight to Asamankese in the Eastern Province, which had become the doctrinal and administrative headquarters of the church.