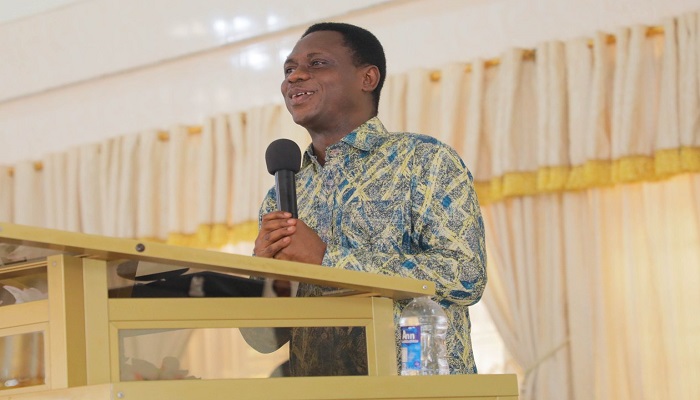 The Chairman of The Church of Pentecost, Apostle Eric Kwabena Nyamekye, on October 4, 2019, visited the Assin Foso Area as part of his one-week working tour of the Central Region.

They were received on arrival by the Assin Foso Area Head, Apostle Sylvester Arhin, and his wife, Mrs. Regina Arhin, at Assin Foso Habitat Prayer Grounds.

Addressing ministers and officers of the Church in the Area, the Chairman expressed his heartfelt appreciation and gratitude to the officers in the Area for their dedication and hard work.

“Assin Foso Area has 27 ministers including the Area Head, 2,790 officers and 65,000 members. How could the ministers take care of this huge number of members without the immense assistance of you, the officers?” he quizzed.

Speaking on the topic: “The Purpose of The Church,” Apostle Nyamekye read from Genesis 12:1-7, Acts 7:1-5, Ephesians 2:11-18 and 1 Corinthians 10:32 among others, and said that God promised to make Abraham a great nation. He explained that God set the Israelites, descended of Abraham, apart as His own people, regulated their lives and made the Covenant of Circumcision with them. “What He did brought about two main groups of people namely the Jews and the Gentiles,” he said.

The Chairman continued that God, through the atoning death of Jesus Christ, has brought into existence the third group of people known as ‘The Church of God.’ He explained that those who constitute the Church of God are both Jews and Gentiles who have accepted Jesus Christ as their Lord and Saviour.

“You are the Church of God. The purpose of the Church is to bring light into the world and possess it. Transform the people around you with the light which is in you to enable them to acknowledge the need to give their lives to Jesus Christ.

“The members of The Church of Pentecost have no time to think about witches and demons because they take God by His word. There is no enchantment against the people of God; there is no divination against His children,” he emphasized.

Apostle Eric Nyamekye also explained the rationale behind the Vision 2023 of the Church dubbed, “Possessing the Nations” to the participants.

The Persons With Disability (PWD) Coordinator, Probationary Overseer Alexander Nyame, in turn, briefly took the officers through the vision of leadership in setting up this specialized ministry. He appealed to them to embrace it wholeheartedly.

Prior to his visit to the Assin Foso Area, the Chairman had visited Cape Coast, Mankessim, Winneba and Agona Swedru Areas, all in Central Region.