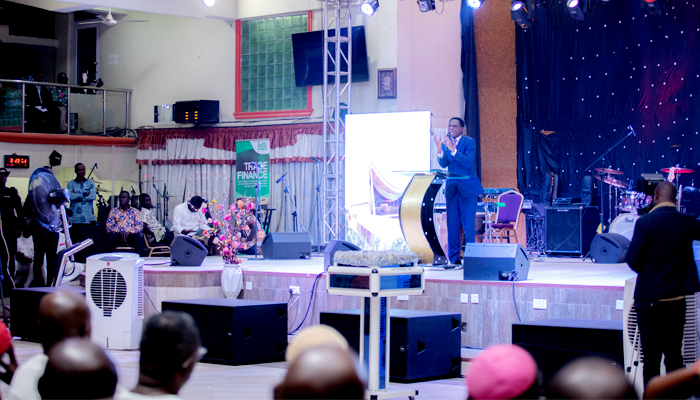 The Chairman of The Church of Pentecost, Apostle Eric Nyamekye, has said that the National Cathedral would only meet its intended purpose as a symbol of the Church of God if Christians model righteousness in every sphere of society.

The Chairman said this on January 30, 2020, at the Bantama Central Assembly church auditorium during a fundraising event towards the construction of a National Cathedral in Accra, the capital of Ghana. The event was organized at the instance of the President of Ghana, H.E. Nana Addo Dankwa Akufo-Addo, who is the vision bearer.

Speaking on the topic: “The Church and the National Cathedral,” with Ephesians 3:10 as his main scripture reference, Apostle Eric Nyamekye stressed that the church is the most powerful institution in the world established for the transformation of society.

He said that God’s intent for establishing the church is that, through the church, the manifold wisdom of God would be made known to the rulers and authorities in the heavenly realms.

According to the Chairman, these rulers and authorities in the heavenly realms are the forces that govern nations, adding that, political figures are in no capacity to confront such powers; instead, the Church is the only institution equipped to deal with them.

“This is why some people come into power with good intentions; however, when they assume office, they fail to live up to expectations. This is because there are forces that govern nations and the ordinary politician has no authority to confront them,” he explained

Apostle Nyamekye further revealed that the Church is not an end in itself, but a vehicle through which the ways of the Lord ought to be made known to the people of the world.

“The focus of the Church is not on herself but the nations, The Church is there for the salvation of the nations, because the church was birthed for the transformation of society; otherwise it is irrelevant.,” he said.

Reading Micah 4:12, he described the Church as the mountain of the Lord where all other institutions (hills) go to learn the ways of God so that His will be done on earth in order to ensure total peace among all peoples on the earth.

Among other reasons, he said that the Church is powerful because it possesses the truth, who is Jesus Christ. He said the Church was established by the blood of Jesus Christ and has Jesus Christ as its foundation. “Jesus Christ is the Truth that brings liberation, and this Truth can only be found in the Church,” he pointed out.

Touching on the essence of the National Cathedral, Apostle Eric Nyamekye said that “the presence of a National Cathedral in the city tells us that God is in the midst of the people. It indicates the true character of the people and reminds the Christian believer who he or she has become in the Lord – a temple. It also challenges Christians to live for the truth, and serves as a constant reminder to us that Christ will one day reign in the midst of His people.”

Apostle Eric Nyamkye, however, warned that unless Christians lead righteous lives, the Church would lose its source of power and become impotent, and as a result, the National Cathedral would not serve its intended purpose as a symbol of the Church.

“If the people of the land will only live a righteous life, the eyes and ears of the Lord will be in the temple. (2 Chronicles 7:14),” he said.

He ended his message by quoting Proverbs 14:34 to buttress his point further. He stressed that righteousness, and not churches, exalt nations and that sin is a disgrace to any nation.

“Our dear nation is full of many churches, yet, corruption has filled the land. This means the Church in this generation is not salty enough to cure the corruption of the land. The church was established to bring a solution to the corruption and not to partake of it,” he said.

The Chairman, therefore, advised Christians to uphold righteousness, honesty, hard work and faithfulness in their various workplaces and homes so that the fortunes of the nations would be transformed for the better.

Speaking on the vision of the National Cathedral, H.E. President Akufo-Addo, said the construction of the Cathedral is an act of thanksgiving to the Almighty for His blessings, grace, favour and mercy on the nation (Ghana). He said that the interdenominational National Cathedral would also help to unify the Christian Community and, help promote national unity and social cohesion.

According to him, the construction of the edifice is also in fulfilment of his pledge to the Lord to build a national cathedral on his election into the highest office of the country.

“The Cathedral will not just be another national monument, adorning the skyline of Accra but it will be the rallying point for the Christian community to come together to worship, to pray and to promote deep national conversion on the role of faith in building our nation (Ghana),” he added.

The President revealed that construction of the national edifice would officially commence on March 5, this year.