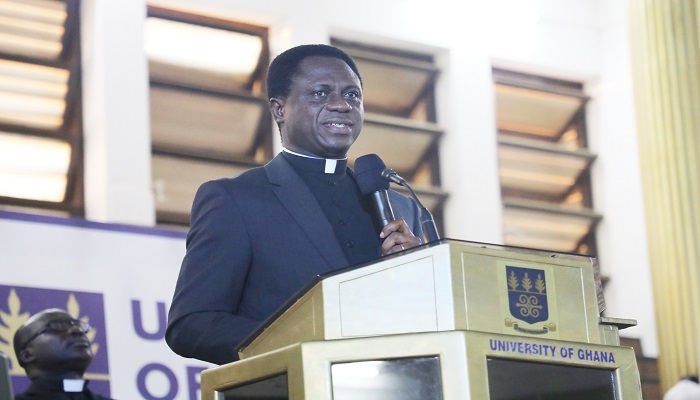 The Chairman of The Church of Pentecost, Apostle Eric Kwabena Nyamekye, was the guest preacher at the 2019 Remembrance Day organised by the University of Ghana, Legon.

The solemn event which took place at the Great Hall on Sunday, November 3, 2019, was attended by senior members of the University community, including the Vice Chancellor, Prof. Ebenezer Oduro Owusu.

The Remembrance Day is a day set aside by the University to remember departed members of the University community who in the course of the year left for eternity.

Remembrance Day provides the opportunity for all members of the University community to remember their colleagues who departed this world during the academic year.

Among the departed members of the University community in the 2018/2019 academic year were Prof. Emeritus J. H. Kwabena Nketiah of the Institute of African Studies, Prof. John Nee-Djan Dodoo of the Department of Modern Languages, Rev. Prof. Elom Dovlo of the Department for the Study of Religions and Mr G. F. Daniel, former Registrar.

In a sermon based on 1 Corinthians 15:12-19; 50-58, Apostle Nyamekye expressed his deepest condolences to the bereaved families for the loss of their beloved ones. “My condolences to everyone one of you. I know it is tough but don’t let anything move you. Don’t dwell on the past. Human beings do not walk backwards, we walk forward; you need to move on with life.

“On a day like this, I know that it is not easy to remember because as you try to remember there is a question that overwhelms your mind. The question of the dead is the most difficult one to answer. How human beings vanish on this planet earth and never to be seen again is something that is mind-boggling. Science has not found solution to death and I don’t think it will ever find, religion has not either. Death renders all men equal. In fact, it makes life in its entirety meaningless,” he said.

Apostle Nyamekye indicated that the Bible gives a perfect answer to the question of death. According to him, Apostle Paul’s epistle to the Church of Corinth in 1 Corinthians 15 perfectly addresses the issue of death and resurrection. He said that despite the fact that the Corinth church prided itself in graces and giftings, people were still dying in the church. To add salt to what they were going through, he said, some people among them began to teach some false doctrine that there was no resurrection or life after death. He said Apostle Paul’s letter was to nib the false teachings in the bud.

Dwelling his sermon on the concluding part of the chapter, Apostle Nyamekye encouraged the deceased families to stand firm in Christ in order to face the storms of life. “Certainly, in life there will be storms, especially the storm of death but let your foundation be strong; let nothing move you. The issue of death will happen to everyone. You have to put it in your mind that one day you will die. Have that consciousness before you get there. Whatever you want to do, do it quickly and do it well and affect the world so that on a day like this you will be properly remembered. People who live meaningful lives have the end in view, because every good and purposeful life has the end in view,” he pointed out.

The Chairman gave some revealing facts about life. According to him, there are certain facts of life that if one does not stand firm in Christ they could be moved away. First, bad things happen to good people as in the case of Job. The second fact of life is that disappointment is a major fact of life, and the third fact is that the world is not fair, so people should not look for fairness since that may disturb them.