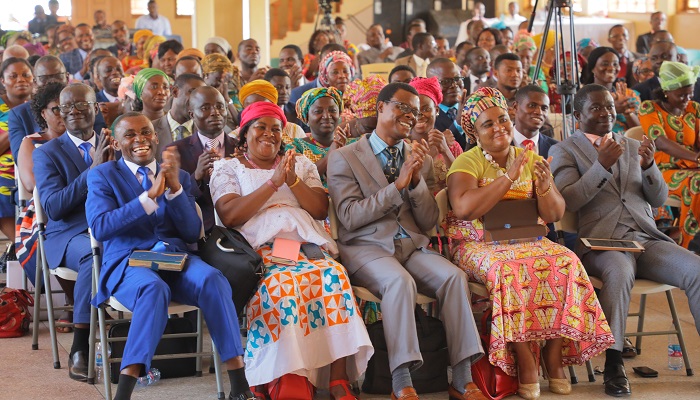 Ministers of The Church of Pentecost in the Central Region and their spouses met with the Chairman, Apostle Eric Nyamekye, on Tuesday, October 1, 2019, as part of his weeklong visit to the region.

The meeting offered the Chairman the opportunity to fellowship, equip and encourage the ministers through prayer and the word of God.

Speaking on the topic; “The Ministry,” Apostle Eric Nyamekye said that the ministerial calling is a call of sacrifice. He said that for one to excel in the work of the ministry, it is important that they fully understand the nature of the call they have received.

Sampling various definitions for the word “Sacrifice”, the Chairman explained that sacrifice is an offering of an animal, plant, or human life or some form of material possession to a deity as in propitiation or homage. He further explained that the sacrifice may also be viewed as the surrender or destruction of a prized possession for the sake of something considered as having a higher or more pressing claim.

“A sacrifice may also mean a loss incurred in selling something below its value. For instance, ministers who are called into the full-time ministry sometimes have to surrender their professional and academic laurels as well as their comfortable lives to serve uneducated people in remote or rural areas,” he said.

Referring to Numbers 3:9-12 and 45, he advised that, like the Levites, ministers and their spouses ought to see themselves as a sacrifice wholly offered to the Lord so as to be fully devoted to the work of the ministry. He assured them of God’s providential grace so long as they remain devoted to the work He has entrusted to them.

“It is just on the account of grace that God has counted worthy and entrusted to us His holy people (those whom He has sanctified through His blood) and His holy things (church assets and offerings). It is our responsibility to ensure that we handle them with great care,” he said.

He also admonished them to live above reproach by taking pains to do what is right at all times not only before God but also those around them.

“As ministers, we must not live crooked lives because we have received a holy calling. For this reason, we must renounce our secret and shameful ways, and be blameless before God and men” he said.

Apostle Nyamekye also took the opportunity to expound the 5-year strategic vision of the church dubbed: Vision 2023. He took the ministers and their wives through the three key strategic approaches that the church has adopted for the “Possessing the Nations” agenda. They are; Equipping church members with the required resources, Transforming society, and Strengthening and re-aligning existing church institutions and structures to propel the transformation agenda.

He encouraged ministers to own the vision and run with it at their various stations.

As part of the meeting, Overseer Nyame threw more light on the newly-introduced Persons With Disabilities (PWDs) ministry and the strategies adopted to ensure its full implementation at the various levels of the church across the nations.