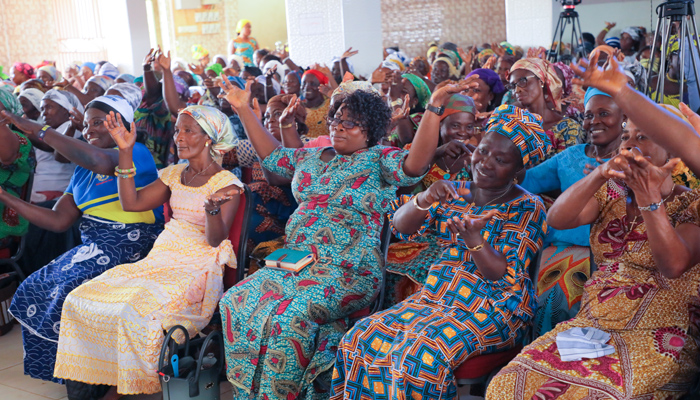 The Chairman of The Church of Pentecost, Apostle Eric Nyamekye, on Wednesday, September 18, 2019, met with Officers in the Asamankese and the newly-created Kade Areas at the McKeown Temple in Asamankese.

The visit, which was his first since assuming office, formed part of his weeklong tour of the Eastern Region to fellowship and share with Ministers and Officers in the region the 5-year vision of the Church dubbed: “Vision 2023.”

The Chairman was accompanied by his wife, Mrs. Mary Nyamekye, and Apostle Samuel Osei Asante, Chairman of the Eastern Regional Coordinating Committee and Area Head for Koforidua.

Addressing a gathering of over 3,000 officers and members, the Chairman read from 1 Samuel 12:8-11 and explained that God chose leaders at specific times to serve His purposes. He explained that just as God chose Moses, Jerub-Baal (Gideon), Barak, Jephthah and Samuel as leaders of Israel at various point in time, the Lord has chosen a new leadership to lead The Church of Pentecost to serve His purpose in this dispensation.

He also noted that when God appoints a leader, He assigns him a task which often comes out in the form of a vision. The vision, he added, is to be shared with others so that together they would help accomplish the will of God. He, therefore, called on all and sundry to devote themselves to the realization of Vision 2023.

The Chairman commended the officers for their tireless services to God and church. He stated that The Church of Pentecost has attained such a great height due to the sacrifices and commitment of non-paid officers.

Apostle Nyamekye urged them to continue to serve the Lord wholeheartedly and be assured that the just God, who never forgets, will reward them accordingly.

Touching on the 5-year vision of the church, the Chairman stated that the call to possess the nations is to influence society with the principles and values of the Kingdom of God. He said that the overall goal is to heal the decadence in society by permeating every sphere of life with the word of God, thereby winning many for Christ.

According to him, “righteousness, and not churches, exalts nations,” hence it is critical for Christians to live up to their divine call as Salt of the Earth and Light of the World in order to transform society.

“Equipping members of the church with required resources, transforming society and restructuring and aligning existing institutions of the church are the strategic approaches adopted by the church to realise the goal of possessing the nations,” he said.

Probationary Overseer Alexander Nyame, who is the National Coordinator for Persons With Disability (PWD), in a presentation, highlighted the need for the church to pay critical attention to the needs of persons with disabilities and accommodate them in the church.

He said that in time past, the church paid little attention to PWDs, however, through Vision 2023, God is drawing the church’s attention to the need to extend to fellowship to such persons.

He said that beyond their deformities, persons with disabilities possess souls that ought to be saved and rescued from eternal damnation. He, therefore, appealed to church leaders and ministers to form PWD committees at various levels to facilitate the achievement of the vision.

Present at the event were the Area Heads for the Oda and Kade Areas, Apostles Seth Asomaning and Lawrence Otu Nyarkoh respectively, and their wives.